Innovation and teamwork are “key to ABS survival” 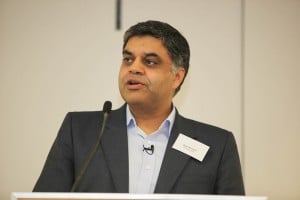 Ahmed: you have to start with customer service and work backwards

Creativity and collaboration should be the priority for law firms looking to fend off the threats from a liberated legal market, with joint ventures, referral networks and share offerings all possible solutions, last week’s Legal Futures conference was told.

The threat to traditional law firms was summarised by Ajaz Ahmed, co-founder of Legal365.com. He said that maintaining the status quo ahead of the launch of alternative business structures (ABSs) was not an option.

“Companies from outside of the law will be able to deliver legal services that many can’t even imagine,” he said. “Law has been a protected industry for too long. It is a market worth billions of pounds and companies want a slice of it.”

Mr Ahmed added that while everyone is convinced their business model was the best, unless law firms could genuinely “disrupt and innovate” they will fail. “You have to start with customer service and work backwards,” he stressed.

A host of market innovators told delegates at the conference, which was sponsored by NatWest, about their own strategies of adapting their businesses in anticipation of the ABS change and how to compete with new rivals. These included James Hunt from Everyman Legal, the first firm to officially announce a plan to offer shares via Sharemark next October, Jennie Pratt from Ashton KCJ, a legal practice that formed a financial advisory joint venture (JV) with an accountancy firm, and Denise Nurse from Halebury, a streamlined legal consultancy of self-employed lawyers who work in clients’ offices.

“Ashton KCJ Financial Planning was ABS-light,” Ms Pratt said about her firm’s JV with accountancy Price Bailey. “We set up four years ago and the two sides provide different qualities for clients as well as providing a solid platform for both our firms. Should every legal firm explore the idea of a JV? Yes, I think so and those firms that say ‘not now’ should not forget the idea.”

Referrals and share infrastructure was another concept outlined with Charles Layfield explaining Manchester firm Pannone’s Connect2Law referral network. The network currently has 2,500 members but Mr Layfield announced plans to expand to 3,300 by April 2013 as well as look into sectors such as outsourcing and legal recruiting as a way of developing support infrastructure for members.

“There is no fee to join and there is a no poaching agreement,” he said. “This means that any client remains the property of the referring firm.”

It was not just direct ABS solutions for solicitors that were reviewed at the conference. Ian Dodd from the Bar Consultancy Network said that there needs to be innovation from the bar to deal with the new world order or the result could be terminal. He specifically discussed consortia of chambers and law firms being created to target the new legal aid procurement and contracts.

“In order to survive as barristers, they will need to collaborate with solicitors,” he concluded.