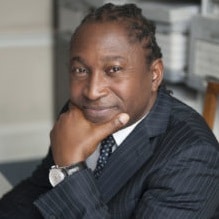 Thomas: We have to change mindsets

Barristers who believe their chambers are ‘colour-blind’ and treat everyone the same “have a problem” and need to change their mindset, a high-profile black QC has said.

“‘Colour blindness’ does not work in a system where everyone at the top of judicial power is white, everyone in the ‘best’ chambers is white, and the two ‘best’ universities in the country have a lack of black entrants,” said Leslie Thomas QC.

“If you are a person of colour, just seeing this would set alarm bells going. We cannot just take race off the table. It needs to be discussed.”

Mr Thomas, until recently joint head of Garden Court Chambers, has just been appointed the first black professor of law at Gresham College, the 400-year-old free public university in London.

A member too of the Bar Standards Board, Mr Thomas said diversity statistics made him think at times that the Bar was actually moving backwards.

“Racism and discriminatory behaviours pervade all levels of society and our legal system is not immune from the same. I have experienced it many times in my career. One judge said to me, ‘Mr Thomas, in this country we do things in this way…’

“Just think about it: if I can be treated in this way and I am a member of a well-respected profession, it takes very little imagination to think how black defendants are treated.”

Writing in a personal capacity for Counsel magazine, Mr Thomas recounted the experience of one black barrister who was told by a judge “that it was nice to see her ‘sitting on this side of the table’, pointing to the side of the table where counsel sit. Another judge told her at a training event that she did not have ‘negroid features’”.

He continued: “There is no doubt that many sectors, practice areas and chambers within our profession lack racial diversity…

Mr Thomas identified messaging as a major problem. “If top commercial chambers are predominantly ‘white, male and older’, getting a message across to them of change is implicitly saying there is something fundamentally wrong with you. This is a difficult message to swallow.

“It is always difficult to change and challenge the status quo, particularly from the outside. There has to be a willingness to tackle this from within.

“But some harsh realities need to be confronted. Firstly, to discuss diversity and improving diversity particularly as it concerns race, there needs to be a proper and honest discussion about racism.

“However, the reality is there for all to see – if we care to look. We as a profession have to move beyond seeing racism as individual characteristics. We need to understand racism as a system, not an event. None of us are exempt from its forces.”

Mr Thomas said progress would be when the profession recognised that racism did necessarily come from individuals, and did not need to be conscious or intentional.

“I believe we have to change mindsets. We do that, I believe, by getting our profession to buy into why they should feel the need to change…

“White members of our profession need to understand that questioning the way things currently are is not about them being attacked, shamed, accused or judged. These are normal reactions and to be expected.

“But it is more a recognition that we as a profession can improve our lot; questions of being good or bad are irrelevant.

“It is a recognition that advantage may well be tied to race and that is systemic. We should forget the guilt and take action. History matters. Bias is implicit and often unconscious. More importantly, it takes great courage to change this system.”