Young lawyers call for centralised assessment test for the LPC 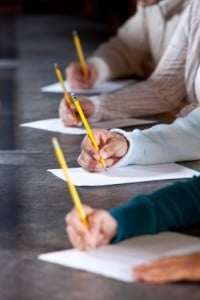 Plans for a new assessment test causing “confusion and concern”

The Solicitors Regulation Authority (SRA) should drop its plans for a centralised assessment test for would-be solicitors at the point of qualification and instead introduce a centralised test for the legal practice course (LPC), young lawyers have argued.

In a letter to the SRA, the chair of the Law Society’s Junior Lawyers Division (JLD) said members had expressed “confusion and concern” about the lack of detail in the regulator’s plans.

There was a “much simpler solution”, Max Harris said. “The LPC has been out of date for a while. The number of people who commence the LPC has – for the past several years – been far above the number of training contracts available.

“There are widely different success rates between institutions, which is odd for a supposedly consistent course. A central assessment for the LPC could and should be considered.”

In April the SRA launched its ‘competence statement’, which sets the standard for practice as a solicitor and also lays out what intending solicitors will be assessed on in order to qualify.

The regulator is now developing a new assessment framework for admission and has previously said that it is looking at three approaches to this.

The first would continue much as now, with the SRA authorising education and training providers to teach and assess specified pathways to qualification, against the requirements of the statement.

With the second, providers would apply for authorisation from the SRA to teach and assess pathways which it would not specify. The third option would see the introduction of a new professional assessment for all intending solicitors, regardless of the pathway they have followed.

A full consultation, with the aim of introducing the framework from the 2018/19 academic year, is due next month.

Mr Harris said workplace learning was a “huge area” of the SRA’s planned central assessment test, which raised a lot of questions.

“It is not known how this element will be assessed, what ‘work’ is included and the duration of the work. We would like the consultation to explain in depth how this part of the central assessment would work in practice.”

The JLD chair said there was a “complete absence of detail” as to how students would gain the knowledge needed to meet the new standards, and suggested that the current qualifying law degree provided a satisfactory minimum.

“It seems the expectation here is that institutions would adapt and offer courses to help students pass the central assessment. However, these courses would not be compulsory. We fear this could have negative consequences for social mobility.”

If centralised assessment was introduced, Mr Harris said there should be a period of recognised training, which would share “similar characteristics” with the present two-year period and which was seen as making up for the relatively short period of academic training.

Mr Harris added that the JLD shared the concerns of the Law Society that the proposals for a centralised test could have a negative effect on the profession as a whole “and the solicitor brand in particular”.