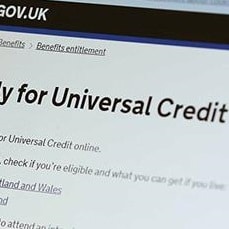 Universal Credit: Barrister said she had to apply

Young barristers are being especially badly hit by the coronavirus crisis and they are unlikely to get much help from the government’s self-employment income support scheme (SEISS).

Many of the barristers, who have just started a tenancy, said this was because their self-employed earnings were so low during the tax year 2018-19, the year SEISS payments will be based on.

The warning comes as Bar Council research shows that the resumption of criminal trials after the Covid-19 crisis could be in jeopardy, because up to 50% of legal aid criminal defence work is carried out by those barristers who face a greater financial risk as a result of the coronavirus.

In a video featuring eight young barristers, posted by the Criminal Bar Association, Danielle Manson, based at Garden Court Chambers, said she had registered for Universal Credit because she was so concerned about her finances.

“I’m not in a position where I’ve got any savings. I’m from a working-class background. I grew up on a council estate and both of my parents have done time in prison. I don’t have anyone who can support me financially.

Ms Manson said she was renting a flat from a landlord who had not given her “any sort of reprieve”.

She said her earnings in the 2018-19 tax year were low because she was often earning no more than £50 a day from magistrates’ court work.

“Since then I’ve started to do more serious and better-paid work, but that is within my 2019-20 return, which obviously is not going to be taken into account.

“It just feels that we’ve been tossed to one side, and we’re the future of the profession. Goodness knows what that future will look like.”

Oliver May, a pupil barrister in his third six months at No5 Chambers, said he had no self-employed earnings for the tax year 2018-19, although he did have employed earnings from the job he did before pupillage.

Mr May, who specialises in personal injury and medical negligence and is awaiting a decision on tenancy, said he was “completely cut off” by the SEISS scheme.

“It does not recognise or respect the complete change in circumstances for someone moving from a steady income from an employer to being completely self-employed.”

Ciara Bartlam, based at Garden Court North chambers in Manchester, said she was seeing no income from housing possession cases, because they were all stayed until 25 June.

Meanwhile, in immigration, another of her specialisms, practitioners described themselves as “shafted” because the First-tier Tribunal has converted all full hearings into case management review hearings, meaning the fee payable was cut from £302 to £92.

Ms Bartlam said that aged debt might cover her for another three to six months, but it would be difficult to look for another job because nobody was recruiting.

Caroline Baker, based at Red Lion Chambers, said it was easy to think that because the majority of “junior, junior tenants” were young, that they did not have a lot of financial liabilities.

“The majority of people I know still carry significant financial liabilities from the Bar course they took two or three years ago.”

Angharad Hughes, based at 3 Temple Gardens, said that without help from the government, young barristers were “basically screwed”.

She said she was still waiting for the £50 she earned from her first appearance in court in April 2019.

Clare Duffy, from Doughty Street Chambers, said she did a lot of inquest work, but all inquests “of significant length” had been postponed until August.

“Not one of my hearings has been turned into a remote hearing, so my diary has been absolutely emptied. So I fall into the category of those needing help and there are many more like me.”

Alexandra Wilson, from 5 St Andrew’s Hill Chambers, said she did some self-employed work in 2018-2019, as a tutor and in a school, but it was “just to get by” while studying. Her earnings in 2019-20 were “drastically different”.

Ms Wilson said: “A lot of people are struggling with rent and have to pay back huge loans.”

The session was chaired by Shina Animashaun, based at Garden Court Chambers.

Meanwhile, the Bar Council research – carried out by economist Professor Martin Chalkley – showed that most of the criminal defence barristers worst affected by the drop-off in trials and so fee income were from diverse backgrounds, meaning efforts to make the profession more diverse could be undone by the financial impact of Covid-19.

It said more than 5,000 barristers – around a third of the Bar – supplied legally aided defence services, but those in the groups most vulnerable to the impact of the pandemic were women, and younger and less experienced barristers in particular, when judged against the whole cohort of some 5,000-plus barristers handling criminal defence work.

Those from a black, Asian or minority ethnic background (BAME) were slightly more represented in the vulnerable group than in the wider population of criminal defence barristers.