You wear it well – at last, court attire for women 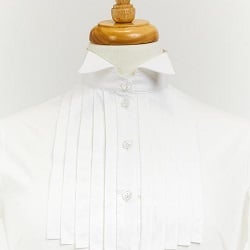 Female barristers can now buy court attire actually designed for them after a London junior launched an online shop named after the first two women called to the Bar.

Ivy & Normanton recalls the achievements of Ivy Williams and Helena Normanton, who were called in 1922 – with the latter becoming the first woman to practise – and the fact that, in the subsequent 98 years, women have had to make to do with male courtwear.

Its founder Karlia Lykourgou, a criminal law specialist at Doughty Street Chambers in London, told Legal Futures that she started work on the project since 2016, “when I got pupillage and walked into a legal outfitters to buy a tunic shirt”.

There were only two choices, “both ill-fitting because they were designed for a man’s body”, while over in the men’s section there were multiple options in many colours.

“Male court clothing is the default,” she said. “Women have very much been an afterthought.”

Her family has “always been in the rag trade”, so she knew how to get the business off the ground, but it has taken four years because she was building up her practice at the same time.

Ivy & Normanton sells shirts, collarettes, collars and bands designed so that, for example, women’s hair does not snag in the collarettes, while the shirts have some stretch in them and also double cuffs, which women’s shirts rarely do.

Ms Lykourgou said the clothing was meant for all women who attended court, such as solicitor-advocates, judges and clerks.

The reaction to the shop, which opened at the beginning of the month, has highlighted how male clothing is the default in many areas of life – the barrister said she had been contacted by a female priest asking if she could make the shirts in black, while her sister is a chef who struggles to find well-fitting workwear.

So why has it taken quite so long for an initiative like this? “We get caught up trying to make it in the profession,” Ms Lykourgou suggested, “and don’t have the time, energy and expertise to address these problems.”

As of last year, 6,389 of 16,982 practising barristers were women, according to Bar Standards Board statistics.

At the beginning of 2019, 218 Strand Chambers in London changed its name to Normanton Chambers – the first set to be named after a female barrister.