“You get noticed” – being a BAME female lawyer 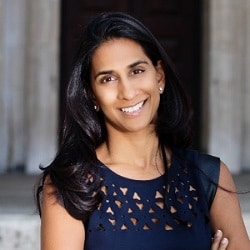 Patel: How will firms deal with flexible work requests post-coronavirus?

There are “real pros and cons” to being a solicitor from a black and minority ethnic (BAME) background, a senior regulatory lawyer has said.

Laura Durrant, consultant at City law firm Howlett Brown, which specialises in employee investigation, said she had worked in “a lot of male-dominated environments” where “you walk into a room and you are noticed”.

Ms Durrant, formerly a partner at US firm White & Case, said this could work in your favour if you were a regulatory lawyer who needed to make a point.

“People notice that you have not spoken yet and give you some air.”

Ms Durrant said in the last five or six years, she had taken to “wearing incredibly bright colours” to meetings, to make sure she was noticed.

“In some ways I’m keen to capitalise on that aspect. I take the positives and get support when there are more challenging things that crop up.”

Speaking on an Interlaw Diversity Forum webinar on ‘Intersectionality, BAME and gender’, Ms Durrant said that, on the negative side, she had “had comments over the years, not just about being BAME and a woman, but coming from a state school”.

Denise Nurse, former chief executive of law firm Halebury – now part of US-based legal services company Elevate – said most of her life had been spent as “the only person of colour or woman in a room”, and she had got used to it.

“No-one is saying ‘you’re not getting a job because you’re a woman’, but we are aware there is less access.”

Ms Nurse said people from a similar background to hers should “be aware that you will have to speak up for yourself”.

She talked about how, after her first year as a trainee, having to “be an advocate for myself and provide evidence” to get what she wanted.

Janvi Patel, who set up Halebury with Ms Nurse, said people had often asked her, because of her skin colour, “is English your first language?” or “have you always lived in the UK?” Ms Patel said she “had tried really hard to shut it out”.

Responding to a question from a female lawyer about returning to work after maternity, she said that she would be “curious” to see how a law firm deals with requests for flexible working, given that with Covid-19, flexibility was “out of the bag”.

Ms Patel suggested that returners to work should “try and be as organised as possible” in their schedules, and be aware there were always other options.

Responding to a young would-be lawyer looking for a training contract, Daniel Winterfeldt, founder and chair of the InterLaw Diversity Forum and a partner at Reed Smith, said the world “isn’t going to stop” because of the economic downturn caused by Covid-19.

“You can’t think: ‘I’m in a hole. Now I’m in a deeper hole.’ You will find a career – you will find an opportunity.” He encouraged job seekers to be persistent, believe in themselves and be creative.

“If people don’t want you, you probably don’t want them. If you’re thinking ‘you don’t want me because I’m a gay man or I’m a black woman’ you might not want to work there.”

Ms Nurse added that “when there is a crash, there is an opportunity”. When she and Ms Patel set up Halebury in 2007-8, Lehman Brothers was going to be one of their first big clients.

“Our only job is to keep going. Get up again, try something new and keep focussing on what you love.”