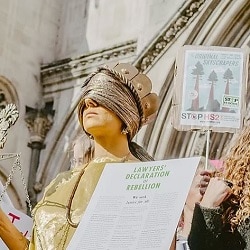 Slaughter and May will tomorrow become the first City law firm targeted for its work with fossil fuel companies by campaign group Lawyers for Extinction Rebellion (XR).

The group said it planned further peaceful protests across the City this year “to expose the role of other UK law firms supporting the fossil fuel industry”.

The protest outside the firm’s offices in London will take place between 8am and 10am. Campaigners will “enact a crime scene”, hand out flyers to the public, and engage with Slaughter and May staff “on the role played by leading UK law firms in propping up the fossil fuel industry”.

The group explained on its Facebook page why it had chosen the venerable City name: “Slaughter and May recently helped Premier Oil clear the first hurdle in its plans to expand drilling in the North Sea, and thereby cause yet more destruction to our planet.

“Lawyers for Extinction Rebellion will be gathering peacefully outside the offices of Slaughter and May to discuss with employees and passers-by this legal firm’s significant and enduring role in the climate crisis.

“Premier Oil is an independent UK company dedicated to the exploitation of oil and gas. It recently got into a spot of bother – serious debt to the tune of $2bn. Slaughter and May to the rescue! They represented the company at a court hearing in January where they headed off its largest creditor, enabling it to buy yet more gas fields in the North Sea. Lucky old Premier Oil; poor old planet Earth.”

The firm’s other oil and gas clients include Shell, INEOS and Maersk Oil.

Lawyers for XR accused Slaughter and May of showing no regard to the environmental damage caused by its major clients, despite its own environmental policy stating that it was “committed to protection of the environment and the prevention of pollution”.

“Lawyers for XR have declared a professional rebellion. The legal community has an ethical obligation to take all possible steps to reduce carbon omissions and it is incumbent on the biggest players to take up the biggest challenges.”

Lawyers for XR is a collective of lawyers “who acknowledge the climate breakdown and ecological crisis and recognise the powerful role of law in bringing about necessary system change.

“We seek to galvanise action across the legal profession to confront the challenges faced. We support the right of Extinction Rebellion and other conscientious protectors to non-violent civil disobedience as a means of achieving the same.”

Among those to sign a ‘Lawyers’ Declaration of Rebellion’ last October outside the Royal Courts of Justice were co-founder Natalie Barbosa, a solicitor, environment lawyer and leading campaigner Farhana Yamin, and Richard Lord QC.

In the wake of the XR protests at that time, when there were mass arrests, a regulatory specialist urged lawyers thinking of taking to the streets to carry out their own “risk analysis” first of the possibility of it leading to action by the Solicitors Regulation Authority.

Gideon Habel of Leigh Day said: “There is a tension between the individual rights of legal professionals protected by the common law and Human Rights Act, and the degree to which a professional regulator can limit those rights to protect the reputation of the profession and carry out its duties as a public interest regulator.”

Mr Habel said it was up to regulators to assess the public interest in disciplining lawyers should offences arise, but every lawyer should carry out their own “individual risk analysis”.