Would you like a will while I’m changing your tyre? AA Law receives ABS licence 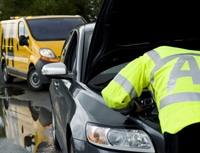 The AA: eyeing up ABS from the start

The AA will next month launch its own law firm after being granted an alternative business structure (ABS) licence by the Solicitors Regulation Authority.

AA Law will start trading on 1 December as a joint venture between the motoring giant and national firm Lyons Davidson, which already has a similar arrangement in place with top insurer Admiral.

Legal Futures first revealed in October 2012 that the AA was applying for a licence, the private equity-owned company having initially entered the legal market in 2010 with a legal document assembly website powered by Epoq, and another ABS – Parabis – sitting behind it. Its success encouraged the AA to expand the offering.

AA Law will initially handle personal injury and other litigation associated with car accidents suffered by AA members and customers, “thus reducing reliance on a panel of law firms”, it said. Employment and contract services are likely to be added “as a natural evolution of the new business”.

Janet Pell, head of AA Law, said: “The AA is often asked by home insurance customers for advice in dealing with legal issues such as conveyancing or wills – and we plan to expand into offering services such as these as well.

“I believe AA Law will quickly become a trusted and accessible resource for legal advice.”

Ms Pell said the AA had been working towards this “ever since ABS was announced”. She continued: “It is a natural fit for the AA, its legal helpline and its motor legal expenses policy, which is already supported by Lyons Davidson… It will enable us to protect our customers from excessive legal costs.”

Mark Savill, managing director of Lyons Davidson, said: “The ABS will allow us to provide a seamless service for AA’s members should they be in a car accident. It also opens up the opportunity to provide AA members with a wider range of affordable legal services which can be accessed through AA Law.”

He told Legal Futures that the firm continues to have talks with others insurers about forming strategic relationships.

Over-50s specialist Saga – which is owned by the same private equity company as the AA – has also gained an ABS licence today.

This week’s Legal Futures conference will debate the impact of big brands in the law. There are still a few tickets available. Click here for full details.