Would you like a will with your beans? Supermarket law becomes a reality 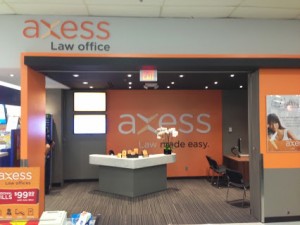 The prospect of law firms opening offices in supermarkets has become a reality in Canada, with a practice opening three within stores of retail giant Walmart amid plans to take the concept ‘coast to coast’.

Axess Law, which started off in 2012 in a ‘regular’ office in downtown Toronto, claims to be the first practice in North America to take this approach.

The first of the supermarket offices opened last year, but co-founder Lena Koke told Legal Futures that the firm kept a low profile until it was sure the concept was proving popular. Each office is open from 10am to 8pm, seven days a week, with evenings and weekends “very busy” as customers have more time.

“We always felt that legal services in Canada were really not affordable for the average Canadian, by and large, and that they were not educated about when they needed a lawyer,” Ms Koke explained.

Walmart customers can “pop in and ask a question” for free, and also buy various products on the spot without an appointment, such as wills, powers of attorney, incorporations, real estate and notarial services. She said they had spent “a lot of time and money” developing a bespoke IT system that enabled the firm to handle high volumes of work, and as a result reduce the cost of its services by as much as 80%.

The open-plan offices are modelled on banks, with enough space between desks to enable lawyers to talk to clients privately: “We train our lawyers to be as discreet as possible.”

The plan is to roll the concept out – “we have designs on going coast to coast” – and if discussions in Canada about embracing alternative business structures turns into a reality, Ms Koke said Axess would consider external capital to help it grow; but it is not needed at the moment.

Axess currently employs nearly 20 people, and she said working in the supermarket stores “takes a certain type of lawyer”.