Witness tried to give remote evidence while driving a van 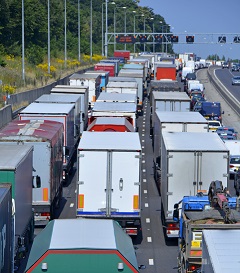 A witness who tried to give evidence by video, first in a van and then in a busy office, shows what can go wrong with remote hearings, a judge has warned.

Recorder Douglas Campbell QC said anyone who obtained an order permitting evidence to be given by video link “would be well advised to think carefully about how the process of giving evidence will actually happen”.

Sitting in the Intellectual Property Enterprise Court in an action for infringement of registered designs, the judge said Dalwinder Singh was one of the first defendant’s witnesses, whom he permitted to give evidence via video link.

“The first time contact was made with Mr Singh, he appeared to be driving a van while dividing his attention between the road in front of him and the camera of a mobile device placed on the passenger seat. I immediately stopped the hearing.”

The judge directed the defendant to re-establish contact once Mr Singh had stopped driving, at which pointed he “appeared to be in a busy office with distracting amounts of background noise”.

“I asked him if he could find a quieter place, which he did. This appeared to be a store room in the same building.

“However, after being sworn it turned out that he had left his witness statement in the busy office. Hence he left the video link running while he went back to the busy office, then returned to the store room with it.

“He was then asked about his exhibit to his witness statement, but he did not have that exhibit with him nor did he appear to know where it was. Similarly he did not seem to know about a brochure to which he had referred in his statement.”

It was at this point that counsel “wisely accepted that the process was not turning out to be a successful one”, and said he would simply rely on Mr Singh’s statement for such weight as it might be thought to be worth.

“This was again realistic,” said Recorder Campbell. “In those circumstances I give Mr Singh’s statement no weight.”

He said he mentioned this to illustrate “the problems that can arise when things go wrong”.

At “a bare minimum”, the judge advised, when the time came for the video link to be activated, “the witness should be in a room with all the case papers before him or her and with no distractions”.

“Otherwise the risk is that the evidence which the party seeks to adduce from that witness will not be given properly, or at all, with potentially adverse consequences for that party’s case.”