Will writers strike bum note in bid to encourage uptake 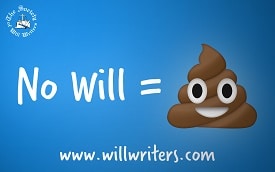 The Society of Will Writers (SWW) has launched a blunt campaign to encourage people to make a will, entitled ‘No will equals poo’.

The visual featuring the poo emoji is accompanied by a short YouTube video (below) that asks: “Do you want to be remembered only for the mess you leave behind?”

The SWW – one of two voluntary self-regulatory bodies in the will-writing world – is launching the campaign via social media, and is asking its members to do the same.

“Using plain speak and language that is in everyday use and easily understood, the SWW aims to raise awareness of the need to have a will,” said its director general, Brian McMillan, pointing out that nearly 70% of UK adults still do not have one.

“We are not trying to shock or make light of the problem, but given that both the young men who run the SWW’s marketing and PR department have in the past few months have first-hand experience of having to support their mothers through the maze of paperwork following a death, it’s a message that needs sharing.

“I am sure that if asked directly how most people would like to be remembered after their death, it would not be for the mess they leave behind for families to sort out at a time when they should be mourning. And dying intestate is the final act.”