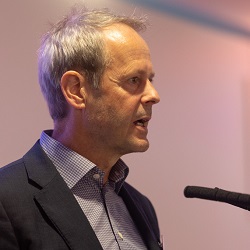 The government considers the Official Injury Claim (OIC) portal – about to celebrate its first birthday – to be a “cautious success”, the deputy director of civil justice at the Ministry of Justice (MoJ) said yesterday.

David Parkin said that although fewer than 10% of the people using the portal were litigants in person (LiPs), he was “still pretty comfortable” about whether or not users were represented by lawyers.

Speaking at yesterday’s PI Futures conference in Manchester, he said the government never had a target for the proportion of LiPs who would use the OIC and aimed only to create an online system easy enough for them to use it “if they chose”.

When the 220 delegates at the conference were asked if they thought the OIC was going well, nobody put their hand up – apart from a colleague of Mr Parkin.

He said that some people seemed surprised that the whiplash reforms had reduced the number of personal injury claims, but this was “the whole point of the reforms for us” and went all the way back to the Conservative manifesto in 2017.

Although the 40% fall in RTA personal injury claims in the past year was “not all due” to the reforms, the government believed they had a “successful reduction effect”.

It was common sense to expect as well that the lower damages on offer and need to have a medical report had reduced fraud.

Mr Parkin said the figures showed that the LiPs fared no worse than represented claimants in getting a decision on liability or in the levels of compensation they received. “Fears that they would be disadvantaged have been proved misplaced.”

The fact that only 0.5% of OIC claims were handled by claims management companies showed predictions that they would “swamp the market” had also turned out not to be the case.

The web-based version of the OIC was working well, and was a “stable and successful system, and the A2A (application to application) version was “working well for the majority of users” – although other speakers indicated that problems with linking to the portal were significantly worse.

Martin Saunders, head of service at the OIC, acknowledged there had been bugs and incidents where the portal had not worked as it should.

However, the “queries and questions from across the market” had largely subsided, with the last request from one of the big integrators to talk to him coming at the end of March.

“It’s a complicated bit of kit. A combination of things meant that some of the integration we hoped for was not quite connected.”

Matthew Maxwell Scott, executive director of the Association of Consumer Support Organisations, said it was “incredible that the government took six years to get this done and still rushed it”.

He went on: “Is it better for consumers? We knew they were going to get lower damages.”

The issue of mixed claims – those with both a tariff and non-tariff element – remains outstanding. Though there are plans to leapfrog test cases to the Court of Appeal for guidance on how they should be valued – there is a dearth of cases to use.

Only 380 OIC cases have reached the stage of creating a court pack and nobody in the audience had received a court decision.

Brett Dixon, secretary of the Association of Personal Injury Lawyers, questioned whether the tariff should be increased to reflect the fact that most claimants were using lawyers and so losing some of the compensation.

“This system was set up for LiPs. If you start off building something for LiPs and end up with over 90% of people being represented by lawyers, you aren’t aiming at the right thing.”

Mr Parkin said that, in line with a commitment made last year to the Lord Chief Justice, Lord Burnett, the MoJ was considering whether a review of the tariff was needed now, rather than after the OIC’s first three years of operation.