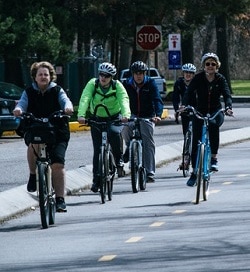 A website offering free legal advice to injured cyclists has been launched with the aim of removing the need for solicitors and saving victims “an average of £800”.

Offering a possible vision of the future if the small claims limit goes up as intended by the government, the founder of Litem, said most road traffic accident (RTA) cases involved small amounts of damages and instant admissions of liability, and could be settled directly with insurers.

After answering initial questions, Litem uses an algorithm to work out if there is a good case, prepares a letter to send to the defendant and calculates what it believes the case is worth. Along with its case evaluation, letter and valuation tools, Litem publishes guides on the personal injury claim process.

Founder Alex Jeffcott, a Berlin-based web developer, said there were “plenty of cases” where people needed advice from a lawyer and RTAs could be “really complicated”, in which case they needed a solicitor.

He said that using Litem would enable those cyclists who needed to see a lawyer were aware of what the process involved.

“Access to justice is about giving people the power to choose what they want to do by having the information they need. Maybe they will make the right decision, maybe they won’t, but at least they won’t be in the dark.”

Mr Jeffcott said that the website, which had a soft launch earlier this year, was updated at the weekend and had “hundreds” of users.

Alex Jeffcott is the younger brother of Oliver Jeffcott, a personal injury solicitor in London and author of The Cycling Solicitor blog. Alex, who is a keen cyclist himself, said Oliver had not played any part in setting up Litem.

However, Alex said he had received informal advice from other personal injury lawyers when setting up the website and was prepared to suggest the names of good law firms if people contacted him.

Mr Jeffcott said it was “crazy” that so many people were unaware of the forthcoming changes to personal injury law and how negatively the increase in the small claims limit to £5,000 would affect them.

He said it was “shocking” that around 70% of injured cyclists could lose access to legal advice as a result and hoped Litem could help fill the “huge gap”.

Mr Jeffcott said he wanted the site to remain free, whether or not there was some monetisation, and he was funding it himself.

“Having an accident as a cyclist can have serious consequences for your life and your family. As a cyclist in Berlin, where it’s easy, I think about the roads in London and how frightening it must be.

“Everything is worse when you do not know what to do, and this is where I want to help.”