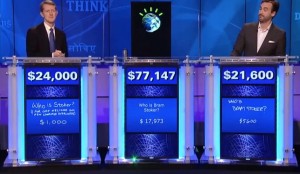 Watson: it won US quiz show Jeopardy, but can it answer legal questions?

Would-be lawyers have designed an app that they claim is the first “artificially intelligent attorney”, able to conduct legal searches in answer to natural language queries, based on IBM’s cognitive computer, Watson.

Known as Ross, the programme is the brainchild of five University of Toronto law students who took part in a competition to win US$100,000 (£65,000) in seed funding, for which they were given access to Watson. They came second to a team from the University of Texas at Austin, which devised a social security information app.

Ross’s designers claim that while existing technologies rely on keyword searches, Watson is able to mine facts and conclusions from over a billion text documents a second in answer to questions posed in normal sentences, such as “What is the leading case in Ontario on an employee starting in a competing business?”

“With junior associates still spending up to 35% of their time on research, some of which is never billed to clients, this could help drive more consistent and efficient results and allow lawyers to focus on potentially higher-value matters.”

Outlining the company’s plans to deploy Watson in the legal profession, he explained: “The ability to quickly make sense of vast amounts of complex and rapidly changing data and use evidence-based hypothesis generation, should be appealing to lawyers. As with doctors and other professionals, lawyers can no longer depend on traditional computing technology to keep pace with the amount and complexity of data that may be relevant in their decision making.”

“For example, in handling a compliance matter, in-house lawyers or paralegals assisted by Watson could have access to a complete and up-to-date regulatory corpus, immediately accessible at the point of interaction with the business, 24 hours a day, seven days a week. This could help streamline and improve decision-making regarding routine labour, tax, audit, or environmental matters.”

But he stressed this was just one of several approaches to delivery by machine learning-based technology – which powers both Watson and Diligence Engine – and that there was “not yet one overarching type that works best on everything”.

He added: “One approach might work great for answering questions, like what Watson/Ross does, another at identifying images… another at finding relevant documents, another at extracting the assignment clause from a random contract…”

“So, while Watson sounds great at question answering… we shouldn’t assume it is going to take over other legal search tasks anytime soon.”

In January, Riverview Law entered a partnership with Liverpool University to apply computer science expertise in artifical intelligence to legal services. Riverview’s chief executive, Karl Chapman, is also chairing a technology advisory council set up to work with IBM and others to shape the development into the professions of decision tools such as Watson.