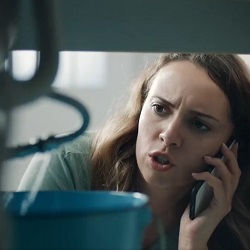 The Advertising Standards Authority (ASA) has rejected a complaint about a TV advert for legal support app Legal Utopia using the word “shyster”.

The complainant, who understood the word to be a derogatory term used to describe Jewish people, challenged whether it was offensive.

The advert on Sky featured a voice-over that stated: “I’ve discovered Legal Utopia; the app to help you save time and potentially save money… It’s accessible, affordable law for all and for all sorts.”

The voice-over continued by giving examples of when the app could be used, including “claims against shoddy shysters”, accompanied by a shot of a women speaking angrily on the phone as she examined leaky pipes under a sink.

Legal Utopia’s agency had referred it at the pre-production stage to Clearcast, which vets adverts and had no concern about using the word.

Legal Utopia said the Oxford English Dictionary defined a shyster as a “dishonest or unscrupulous person”, adding that the etymology of the word was not clear and that most interpretations did not have an antisemitic basis.

It argued that the interpretation of the word coming from character of Shylock in the Shakespeare play The Merchant of Venice was “exceedingly remote and unsupported”, and so using it would or could not cause serious or widespread offence.

Clearcast told the ASA that it was very clear from the context that the word would be interpreted by the viewer as it was intended by the advertiser – to mean an unscrupulous or disreputable tradesperson.

In its decision, the ASA said the context of the scene “implied that the woman was berating a plumber who had carried out substandard work and that she could choose to seek legal recourse through consulting the app”.

It went on: “We understood that there were a range of opinions about the etymology of the word ‘shyster’, including that it referred to the character Shylock in The Merchant of Venice who was a Jewish moneylender.

“Others believed the word originated from the German word Scheißer. We understood that its common usage in British English was to describe an unscrupulous or disreputable person.”

The ASA said it sought the views of the Board of Deputies of British Jews, which had “no concerns about the use of the term in the ad”.

While some viewers may find the term distasteful, the regulator said, “we concluded that in the context of the ad it was unlikely to cause serious or widespread offence”.

We reported last month that Legal Utopia was trying to crowdfund £200,000 for the next stage of its expansion. With the investment period about to end, it has smashed through its target, with 252 investors putting in nearly £215,000.