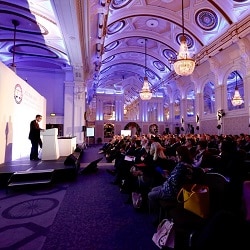 The government risks the UK legal system being “relegated to the world’s second division, at the worst possible time” because of Brexit, the chairman of the Bar Council has warned.

However, Andrew Walker hinted at thawing relations with the Ministry of Justice.

He said that, “if the Treasury were willing”, then the LASPO review – due to be published by the end of 2018 – “would present us with an opportunity to show our mettle in a post-Brexit world”.

However, if this was not done, “there are competitors abroad who would rejoice at our demotion”.

In a strongly worded attack on government policy over the last two decades, Mr Walker told the Bar Council’s annual conference on Saturday, that over that period “we have been following a course that has set its face against justice, by political design, political folly and political expediency”.

The cuts to legal aid present “a huge threat to access to justice in our country”, he said.

“We have managed to keep our family and criminal courts going only through the same combination of strengths at the Bar that have led to our success internationally, and which unite us all: not least our resilience, our adaptability, and our commitment to justice come what may.

“But this has also preyed on our goodwill. This is not just a betrayal of our own citizens and of what our forebears built after the horrors of the first part of the 20th century. It is also a threat to our respect and reputation abroad.

“If we can no longer deliver access to justice of which we can be proud – even worse, if our systems of family and criminal justice start to fail – then then our justice and rule of law are at risk.”

Mr Walker welcomed the announcement by Lord Chancellor David Gauke of an extra £8m, on top of the already promised £15m, funding boost for the Advocates’ Graduated Fee Scheme.

“I do have the sense that in relation to criminal justice, at least, we have at last turned a corner with the current Ministry in terms of engagement and understanding,” he added.

Mr Walker added: “Our objection to justice being downgraded and demeaned has been passionate and unwavering, and so it must continue.

“But our politicians and the public have a choice to make. They must make it wisely. If they take all this for granted, then I fear that we will all pay the price.”

In his later speech to the conference, Lord Chancellor David Gauke told delegates: “I want to say to you that I do understand and recognise your concerns about the sustainability of criminal advocacy. I also recognise the work which goes into conducting complex cases.

“I know there are strong concerns and that feelings and passions have run high this year as we have sought to improve the current legal aid scheme.”

He said the extra £8m would be “mostly targeted at cases conducted by junior advocates to support continued investment in the profession”.

Further, a proposed 1% increase to all fees will be brought forward so that the rise comes into effect alongside the planned introduction of the new scheme, rather than from April next year.

“I also think it’s important to recognise that whilst these improvements must be given time to bed in, there is scope to further improve the way criminal advocates are paid so that we better reflect work done in an evolving and modernising justice system.

“Our best chance of succeeding in that task – in designing schemes which incentivise efficient and effective proceedings, in improving access to justice – is if the government and the legal professions work together.

“Because of that belief, I am committed to working closely with the legal profession to ensure that criminal defence advocacy is fit for the modern age, and is sustainable, so that people from all backgrounds can enjoy a decent career doing such important work.”