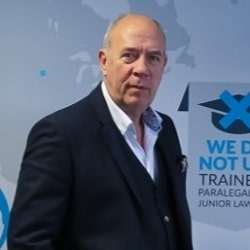 Taylor: Standards & Regulations legitimised what group has been doing

A virtual law business that uniquely combines regulated and unregulated legal practices, with lawyers in the UK and across the world, has launched a subsidiary in the USA.

Robert Taylor, chief executive of 360 Law Group, said the subsidiary was needed “for business rather than legal purposes” to attract more clients in an “enormous” legal market.

Mr Taylor, a barrister who worked in-house, said the group has over 200 consultants in more than 50 countries around the world, all of whom were experienced lawyers.

He described the 360 Group as unlike other virtual law firms in the UK, which tended to “bring in as many consultants as they can” because the consultants provided the work.

“We do things the other way round. We have the clients and contract with them. We are drawn to increase our consultants by our client base.”

Mr Taylor said the Standards and Regulations, introduced by the Solicitors Regulation Authority (SRA) in November last year, had “legitimised” what the group had been doing for the previous six years.

Under a unique structure agreed with the SRA, the firm’s solicitors and barristers were previously described as ‘legal counsel’. Now he said solicitors could sign themselves off as solicitors, and the fact they were individually regulated by the SRA would give “added protection” to clients.

Mr Taylor said the firm’s consultants in the USA, Canada, Mexico and the rest of Latin America would transfer to 360 Business Law America, which has opened an office in Washington.

He said the same approach would be applied to Australia, where an office would be opening soon to cover not only Australia but also South-East Asia.

With the group getting “more and more business” from the USA, there was a need for greater administrative control.

The subsidiary is headed by J Benjamin Lambert, a US attorney who worked for Baker McKenzie, and has practiced in compliance, technology and commercial law.

Mr Lambert said businesses had “a real need for this type of service where they can receive high quality legal advice, but with significant cost savings”.

Mr Taylor said he had “no doubt at all” that the coronavirus pandemic would permanently change the way lawyers worked.

The group introduced a pioneering video-signing service for statutory documents which led Companies House to confirm that it will now accept declarations of solvency sworn by video. Mr Taylor said the approach was likely to be extended to other documents such as wills

He predicted that the crisis would lead to more working from home and the structure of legal services would change over time.

“Smaller is more beautiful,” he said. “Small firms are more agile and can move more quickly.