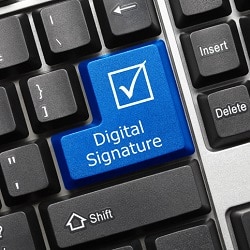 Electronic signatures: Allowed under law as it stands

Witnessing deeds by video link has moved a step closer after the government accepted a call to set up an industry working group to consider it.

Lord Chancellor Robert Buckland this week threw his weight behind a Law Commission report on the electronic execution of deeds, which also confirmed that the current law provided for electronic signatures.

In a written statement laid in Parliament, Mr Buckland said he agreed that formal primary legislation was not necessary to reinforce the legal validity of electronic signatures.

“The existing framework makes clear that businesses and individuals can feel confident in using e-signatures in commercial transactions,” he said.

It said the common law adopted a “pragmatic approach and does not prescribe any particular form or type of signature”.

However, the commission said that deeds required the physical presence of a witness, even where both the person executing the deed and the witness were using electronic signatures.

The majority of respondents to a Law Commission consultation supported the idea that “it should be possible to witness an electronic signature via video link and then attest the document”.

The consultation proposed that video witnessing should be carried out either via a signing platform which the signatory and witness log into, or by the signatory emailing the document to the witness immediately after signing.

A majority of respondents (72%) said they preferred the platform because email was not “sufficiently secure”.

Mr Buckland added: “The report highlights that technological advances have meant that the status of electronic signatures is also applicable in other fields of law, and I note that while this presents opportunities, it also entails challenges. These include ensuring that reform does not have any adverse impact, particularly on vulnerable people.

“That is linked to the Law Commission’s recommendation that there should be a wider review of the law of deeds, which I accept.

“The government will ask the Law Commission to undertake this review, although the timing for the review will be subject to overall government and Law Commission priorities given the volume of law reform work which exists.”