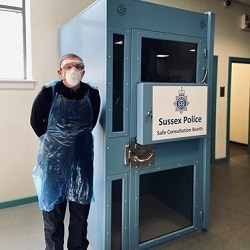 A safe consultation booth in Brighton

Video hearings in certain criminal cases are more likely to lead to defendants receiving a prison sentence, a major study has found.

It also highlighted the difficulties defence advocates have in building trust with clients and doing their job effectively from a remote location.

There were positives too: video hearings were “generally shorter”, the “general demeanour” of defendants was not affected and video links worked successfully at the first attempt in almost 90% of cases.

The pre-lockdown research by Surrey University is particularly timely with the Covid-19 pandemic likely to accelerate the use of remote hearings across the justice system.

Commissioned by the Sussex police and crime commissioner Katy Bourne, it was based on 631 observations of first appearance remand hearings and 46 interviews with professionals and former defendants.

The research’s focus was on the effectiveness of a booking tool which has been developed under the Video Enabled Justice programme funded by the Home Office.

The tool is a web-based software program that books appointments for first appearance remand hearings in situations where defendants were arrested, denied bail, and had their court hearing conducted via secure video link whilst remaining in police custody.

Following its implementation into courtrooms, the booking tool was used to establish the video links between the remote locations and police custody.

Five police force areas have been using video technology, with over 8,000 video remand hearings taking place in Kent, Suffolk and Norfolk since June 2018, and Sussex and Surrey coming on stream last month.

Sussex police have also installed ‘safe consultation video booths’, which defendants can use for the video hearings and also remote consultations with their lawyers.

The report found the booking tool had “relatively modest, positive effects” on the listing process.

The absence of the defendant from the courtroom contributed to a “perception that control of the listing process had shifted away from legal advisers/the judiciary”, but video hearings were “generally shorter” than those carried out face-to-face.

Some form of punishment was handed out in 41% of hearings; 48% of video hearings led to a custodial sentence (before the listing tool was introduced, 46% afterwards), compared to 20% of those in the primary comparator group of defendants who had been arrested, denied police bail and transported from police custody to court.

By contrast, fines, community orders and other costs orders were more frequently recorded in non-video hearings.

Defendants in video court were less likely to have legal representation than those in non-video hearings. The booking tool flags a case as ready to proceed regardless of representation.

Where lawyers were involved, video hearings caused them difficulties; their attempts to speak with clients during hearings decreased, the research found.

“The loss of courtroom formalities (eg, standing to address the court) could exacerbate the sense of distancing experienced. These issues were reported by both courtroom professionals and former defendants.”

The research continued: “Communication was more challenging when defence advocates appeared from remote locations, although such appearances already occur in just under one-third of all video court hearings.

There was also a concern that appearing over the video link could make defence advocates less effective, particularly in relation to bail applications.

“Difficulties with communication limited the ability of advocates appearing from remote locations to discuss the details of cases with those in the courtroom as part of pre-hearing conversations.”

There were a number of complaints that video hearings were “impersonal”, with two former defendants making references to the “caging of animals”, and one saying “they treat you a bit more like a human being” in court, where they could see their family in the public gallery.

Video links to court were successfully established at the first attempt in 88% of hearings. The report found that communication was “more challenging” when defence advocates appeared from remote locations.

The research said: “Although participants saw limited direct benefits for their roles, most recognised the broader role that video technology could play in the criminal justice system, particularly with respect to the giving of evidence over video link during trials.

“Reservations about the increased use of video centred around the importance of having a properly resourced system.”

Professor Nigel Fielding, lead author of the report, said: “Our report provides valuable insights on video-enabled justice for the court service and court users just as the Covid-19 pandemic seems poised to lead to a dramatic rise in the use of technology and other innovations to ensure the effective continued administration of justice.”

He said courts would now be using existing audio-visual equipment on a ‘whatever is to hand’ basis, with many courts having “relatively basic” equipment and “very few courts being equipped with booking software”.