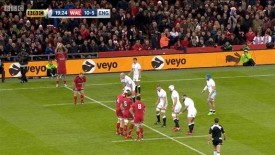 Veyo, the Law Society-backed business that will shortly bring its conveyancing portal to the market, says the high-profile advertising during last week’s Wales v England rugby match did its job in kick-starting its outreach to key players in the home-buying market.

Veyo is a joint venture between the Law Society and IT company Mastek UK, and is scheduled to launch on 31 March, but there has been criticism from conveyancers about the lack of information released to date, in particular the pricing.

The online portal aims to bring together all the conveyancing processes, checks and documentation preparation on to one platform, with its ‘chain view’ feature enabling those in a chain to check the status of all the transactions.

Veyo CEO Elliott Vigar said: “The response to our first high-profile marketing initiative has made a great impact and we are excited to be promoting our USPs as we roll out our campaign. Since Veyo offers major advantages to conveyancers, estate agents, panel-managers, lenders and home-buyers, we have designed a marketing campaign to reach all of these groups.

“Perimeter advertising at the Six Nations match broadcast on BBC1 offered a cost-effective way of delivering that message.”

Maud Rousseau, Veyo’s marketing and communications director, told Legal Futures that at this stage promotion was more about raising brand awareness with the big property portals, journalists and others so that conversations can begin about the Veyo offering ahead of launch. She said “it was noticed by the right people” and some had “picked up the phone” as a result.

Responding to speculation about the cost of the exercise, Ms Rousseau said: “We had a very good deal – people don’t know how much we spent. We are spending a lot more on trade advertising.”

Veyo has continued to make senior appointments in recent weeks, including new commercial director, Stefanie van den Haak, previously sales and partnerships director at QualitySolicitors; and head of business development Richard Garland, who joins from the 360 Legal Group, where he was senior business development manager.