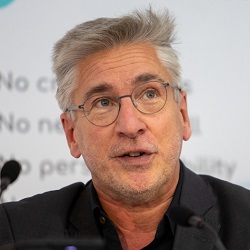 Din: Significant amount of US private equity heading to UK

A number of large UK commercial law firms will fall into the hands of US private equity investors next year, the founder of Doorway Capital, which owns national firm Simpson Millar, has predicted.

Steve Din told Tuesday’s Legal Futures Innovation Conference in London that the focus for investors would be large firms that have decided to embrace damages-based agreements (DBAs).

He pointed to figures published by listed law firm Rosenblatt that indicated it expected to see returns of four or five times the amount it has invested in DBA cases.

Mr Din said the DBA regulations had previously discouraged many law firms, but litigators were now increasingly looking at them “as a mainstream way of funding litigation”.

Enabling them to offer clients DBAs was the “most exciting prospect and future in relation to providing capital to law firms”.

He had been planning on taking some time off in New York next month, but instead his diary has been filled with meetings with US private equity firms interested in investing in UK legal services.

“They’re not interested in Doorway or Simpson Millar. They’re simply looking at the landscape of the UK legal services market and how they can target their capital into it.

“I think we’re going to see a significant amount of US private equity coming over to the UK. They’re going to target the large law firms.”

Mr Din noted that there had been more private equity investment worldwide in 2021 than in any previous year.

He told delegates: “The US private equity funds will do their homework before they come over, but I do think they will come and when they do, they are going to want to create value based on what they have done with their other portfolio companies.

He said brokers had tried to estimate how many “investable” UK commercial law firms there were and come up with a “range of answers” between six and 20.

“There is not a plethora of law firms out there which are right for private equity money. Those that have got the right model need an awful lot of preparation for that type of investment to secure the right return.”

The conference heard from UK private equity firm ScaleUp Capital, which targets much smaller businesses, and in 2014 took a 35% stake in Keystone Law in return for £3.15m.

Frank Hyman, ScaleUp’s chief operating officer, revealed that it had achieved a return on investment of 11 times – it usually looks for around six.

He said ScaleUp was interested in taking a majority or minority stake in law firms with a revenue of £1m to £10m and could help them through a “challenging scaling up period” with equity finance and management support.