US firm employee sanctioned for ‘drunk on plane’ conviction 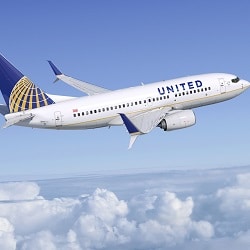 United Airlines: Flight had to turn back

An employee in the London office of US law firm WilmerHale whose drunken actions on a transatlantic plane caused it to turn back has been rebuked and fined by the Solicitors Regulation Authority (SRA).

Michelle Marie Van Buskirk was convicted a year ago of entering an aircraft whilst drunk and assault by beating but was spared jail because she had a genuine panic disorder related to flying.

According to the SRA, Ms Van Buskirk, who is American, was travelling “partly in connection with the firm’s business” at the time.

She was sentenced to six months’ imprisonment, suspended for 12 months, to undertake 100 hours of unpaid work, and to pay £4,500 compensation and a victim surcharge of £115.

According to newspaper reports of her conviction, Ms Van Buskirk was drinking before she even boarded the Washington DC-bound United Airlines flight, and was then disruptive, swearing and shouting, before passing out.

When she came to, she hit a stewardess and was banging on the exit door, before the pilot decided to turn the plane around an hour into the flight. The passengers had to spend the night in London before flying the following day.

A regulatory settlement agreement with the SRA saw Ms Van Buskirk – said to be an IT worker at the firm – accepted a rebuke and fine of £2,000, the most the SRA can sanction an individual without having to refer them to a disciplinary tribunal.

She admitted that she failed to behave in a way which maintains the trust the public places in her and in the provision of legal services.

The SRA said the sanction was a proportionate outcome “because it recognises the seriousness of Ms Van Buskirk’s conduct but takes account of the mitigating features that the court found to be present”.

This was that she has “a genuine panic disorder for which she has received medical treatment in the past. This is directly concerned with flying following a genuine and very traumatic incident in her past”. The agreement said she had forgotten her prescribed anti-anxiety medication and therefore could not take it, and was “particularly anxious because of the time spent on the runway as the flight was significantly delayed”.

The court found that the assault was reckless, rather than deliberate, and also accepted her remorse. The SRA noted that she has apologised for her conduct and co-operated fully with its investigation.

The sentencing judge was reported as saying that the mitigation was why he took the “exceptional decision” to suspend her sentence.

He said: “Your work colleagues and friends have called you a hard worker, generous, kind and warmhearted… You have a prestigious job… if you are put into prison you will lose your job, be deported and banned from the UK. The behaviour is totally out of character for you.”