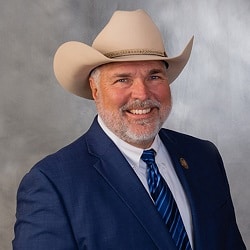 McDougal: I intend to do better

An American Bar leader who called the Black Lives Matter movement a “terrorist group” five years ago has been denounced “in the strongest terms” by his own organisation.

Larry McDougal only took over as president of the State Bar of Texas last month but last week was criticised for an online comment under a photo of a person wearing a Black Lives Matter T-shirt to a polling station, which he argued was breaking election law.

He said it was no different to a case in which someone who wore a Donald Trump ‘Make America Great Again’ cap was found to have broken the law.

Ashton Woods, the founder of Black Lives Matter Houston, who shared the post, then circulated an online comment Mr McDougal made in 2015 in which he said: “Groups like Black Lives Matter has publicly called for the death of just not Police Officers but also White Americans. This is a terrorist group.”

Mr Woods called on Mr McDougal to resign and said no judge should appoint the criminal defence attorney to represent black clients.

However, only 44 people (at the time of writing) have signed up to a Change.org petition calling on him to resign, although the majority of responses on the Bar’s Facebook page were critical of the president.

They pledged to address the concerns of members who questioned the association’s commitment to diversity and inclusion, and concluded: “The State Bar of Texas and our legal profession are larger than any one person, but we believe each person can be a vehicle of change and we hope for positive change throughout the remainder of this bar year.”

Mr McDougal has responded to the criticism with a three-minute YouTube video, in which he said he was sorry that his comments had been hurtful to members of the Bar, and regretted if they had reflected negatively on the association.

“I apologise and I intend to do better… I denounce racism in any and all forms,” he said, adding that the 2015 post did not reflect his beliefs today.

“I will work hard to eradicate any issue of white supremacy and ensure equal justice for all black Americans,” he said, supporting the creation of a task force to address the “ongoing challenges of ensuring diversity and inclusion in the legal profession”.