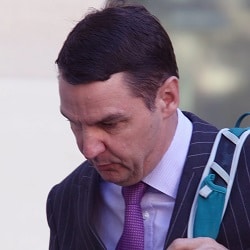 A senior barrister working for the government on Brexit, who was one of the first people in the country convicted of ‘upskirting’, has been banned from returning to practice for six months after he completes his sentence.

A Bar disciplinary tribunal heard this week that Daren Timson-Hunt, 55, admitted hiding his mobile phone under his right leg to take a video of a female passenger’s crotch while sitting next to her on a Northern Line train on the London Underground.

He followed her up the stairs at Embankment station, continuing to film up her dress.

A plain-clothed police inspector confronted him shortly after 9.30am on 1 June 2019. Mr Timson-Hunt replied: “I do not know why I did it. I have never done something like this before. I am an idiot.”

He admitted the offence at Westminster Magistrates’ Court in September last year and was sentenced to a 24-month community order with a 35-day programme requirement, 30 days of rehabilitation activity and 60 hours unpaid work. He was also placed on the sex offenders register for five years.

Mr Timson-Hunt, who does not currently have a practising certificate, was head of the EU exit and goods legal team at the Department for International Trade until August last year. Following his conviction, he was dismissed from the Financial Conduct Authority, where he was due to begin working the following month.

The tribunal said his conduct showed a lack of integrity and damaged the public’s confidence in him and the profession.

Mr Timson-Hunt claimed before the tribunal that his actions were not premeditated, as he could not change his route or behaviour in such a crowded station.

When stopped at the top of the stairs by the police, he said he immediately admitted what he had done and then apologised to the victim “unreservedly”.

“I didn’t intentionally follow her, obviously when you leave the train it’s packed, she was in front of me but that wasn’t by any choice. I sat next to her because that was the only seat that was free.”

He said one of the reasons he pleaded guilty was so the victim did not have to attend court.

The police report stated that he waited at the stairs so the woman could walk ahead of him, but the barrister said: “There was quite a push of people, at that point I may have let the people go first but it wasn’t holding back to wait for her.

“It’s a continuous offence, my phone was running but I hadn’t looked at it, I wasn’t stood at the staircase waiting for her.”

The phone containing the video was confiscated and destroyed.

In mitigation, Mr Timson-Hunt described family issues – his wife was recovering from a serious illness and he was caring for their young daughter – and work pressures.

He said: “I was working on delivering the customs tariff, thousands and thousands of pages of legislation, advising on foods on 42 international trade agreements at the same time, delivering those, whilst responsible for a team of six lawyers dealing with various other matters.

“It in fact was exceptional because it got to the point that the legal department started to pay overtime because of the hours, which they don’t normally do.

“I would work at times until two or three in the morning; it didn’t happen every day but was enough that it would accumulate.”’

He added: “I was also the wellbeing officer for 70 members of staff. The irony of that was I took care of their wellbeing over my own. I was close to the point of mental collapse at the end. In terms of family life as well it had a very negative effect.”

He said he wanted to resume legal work once the 24-month community order expires in September 2021, the tribunal heard.

Mr Timson-Hunt received Job Seekers Allowance until March 2020 when he began working as a “manual worker in logistics” earning little above minimum wage.

He has completed his unpaid work requirement and is in the process of completing the rehabilitation activity requirement, which was paused due to the pandemic.

The victim told the court hearing that the incident had deeply impacted her day-to-day behaviour – preferring not to wear a dress or skirt – and made her avoid public transport.

The tribunal accepted that there were not any aggravating factors and acknowledged the circumstances he was in at the time, as well as two character references “which do him great credit”.

It ordered that Mr Timson-Hunt cannot obtain a practising certificate for six months and must have fully complied with his community order before applying for one. He must also pay £1,200 in costs.