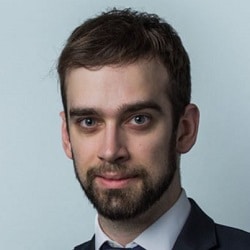 A barrister working as a trade union’s in-house lawyer is considering a claim for false imprisonment against the Metropolitan Police after he was briefly arrested on a picket line.

Barrister Franck Magennis of Garden Court Chambers is currently seconded to United Voices of the World (UVW) – which represents low-paid and predominantly migrant workers mainly in London’s outsourced industries – as head of the legal department.

He was part of a protest on behalf of outsourced security guards at St George’s medical school, part of the University of London, who are complaining about being paid less than in-house staff.

According to the UVW, the incident on Monday, which took place shortly after 9am, saw 12 police officers arrive at the university after being called by management to dispel workers and trade union officials from what it said was a “lawful picket”.

The UVW said that when Mr Magennis inquired into the legal basis of the warning, he was arrested and handcuffed.

He was subsequently de-arrested and released less than five minutes later on the condition that he immediately leave the site.

Mr Magennis’s solicitors, Hodge Jones & Allen (HJA), said yesterday that they have secured an assurance from the Metropolitan Police that for the ongoing industrial action, only the neighbourhood policing team would be deployed to “monitor the protest and ensure it passes peacefully”.

The firm said the assurance added that “officers will of course respect workers’ rights to protest peacefully”.

Mr Magennis is now exploring his legal options in relation to his arrest. He said: “If my false imprisonment goes unchallenged, the Metropolitan Police would in effect be allowed to criminalise what is lawful civil activity. This would have a chilling effect on workers’ rights.

“Anyone concerned with a worker’s right to stand up and take industrial action, without being arbitrarily arrested, should be seriously concerned about the way the police have acted in this affair.

“Workers should be allowed to go on strike without being threatened with arrest. This is an outrage.”

HJA partner Susie Labinjoh added: “Mr Magennis’s arrest clearly raises important constitutional issues. We will be looking at all legal avenues to ensure that the police are held to account, that trade union members are not criminalised for going on strike, and that people are not arbitrarily arrested. The police must respect and uphold union members’ right to protest.”

A Metropolitan Police spokesman said: “Police were called to St George’s Hospital shortly after 08.30 on Monday 13 January to reports of anti-social behaviour.

“Officers attended. A group of protesters were found who were refusing to leave NHS premises.

“One of the protesters was arrested for a public order offence but was then dearrested once the group of protesters had been moved off NHS premises.”