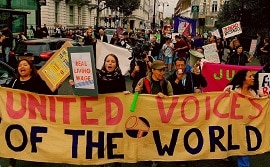 United Voices of the World: Lawyers back legal push

The legal sector is “riddled with poverty pay and huge wage inequality and junior workers are bearing the brunt”, a trade union has claimed as it bids to attract members from across the legal sector

Legal Sector Workers United (LSWU) is part of United Voices of the World (UVW), a union founded in 2014 that has had success in representing people working in outsourced industries in London, such as cleaning, portering and security.

It follows discussions between several unions as to which was best placed to represent the legal sector.

“Paralegals often do not even earn the real London Living Wage of £10.55 per hour, yet equity partners in the same firms can take home over £2m per year,” LSWU said in its launch announcement.

“Likewise, some junior barristers earn as little as £12,000 per year and can often earn under even the minimum wage after costs are deducted for a days’ prosecution, which is sometimes paid at a flat fee of £46.50.”

UVW said it already represented workers across retail, hospitality, recycling, construction, NGOs, education, and trades such as carpentry, electrical and locksmithing, as well as workers in the sex industry, predominantly strippers.

It campaigns for all members to receive at least the London Living Wage, contractual sick pay and other rights, dignified and safe conditions, and general respect.

It claims to be the first union in the UK to beat outsourcing by organising a strike of cleaners that forced the London School of Economics to terminate a £5m annual contract to bring the cleaners in-house.

The union has been in dispute with the Ministry of Justice for some time over its cuts to legal aid and failure to pay the real living wage to 3,000 of its in-house and outsourced staff – security guards, receptionists and cleaners.

Mr Hendy said: “I support the unionisation of all workers in all sectors. The inequalities in income and in terms and conditions in the legal world are notorious and I therefore support the initiative to form the Legal Sector Workers.”

Mr Black said the LSWU sought to bring about a common purpose across the legal professions and beyond. “The law may be broken, but it can be fixed by ensuring the voices are heard.”

Ms Wibberley added: “With the arrival of LSWU, as part of the trade union movement, we see a new generation of lawyers, with a renewed sense of purpose and a vision for the future, determined to protect legal aid and all that it stands for.

“It signifies a turning point in the politics of legal provision and a step towards a brighter future.”