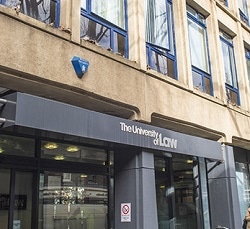 ULaw: now only one of the leading law schools

The University of Law (ULaw) is to stop claiming that it is the “leading” law school in the UK in the wake of a ruling by the Advertising Standards Authority (ASA).

The ASA upheld a complaint about an advert published by ULaw after finding the evidence supplied by the university incompatible with such a claim.

ULaw was told not to repeat it without “adequate substantiation”.

A spokeswoman said: “While we are disappointed by the ruling, we have taken on board the ASA’s comments and will refer to ourselves from now on as ‘one of the UK’s leading law schools’.”

The advert was in a section in a national newspaper in August titled ‘Your guide to clearing’. It said: “Secure your place at the UK’s leading law school.”

A retired university law professor challenged whether the claim was misleading and could be substantiated.

In support of the claim, ULaw provided evidence to the ASA that it had substantially more places for post-graduate law students and more who went on to start a training contract every year than any other provider.

Bar Standard Board figures for 2016 also showed its students were far more likely than the average to achieve the top ‘Outstanding’ score in the Bar professional training course (BPTC) exams, and go on to secure pupillage.

However, in an adjudication published today, the ASA said consumers would interpret the claim to be “the UK’s leading law school” to be a comparison with the law schools/faculties of all UK universities and higher education providers in both the public and private sectors which provided undergraduate and postgraduate law qualifications.

“In the absence of information in the ads to explain the basis of the claim, we considered consumers were likely to understand it to mean that the University of Law was ranked as the top law school in relation to factors such as the percentage of their enrolled students who graduated, the percentage who graduated with the highest grades, and the percentage of their students who went on to secure further relevant professional training (such as training contracts for LPC graduates or pupillage for BPTC graduates).”

Without a clear qualification in the advert explaining that the claim was based on the number of places available and/or students enrolled, “we considered it was not relevant to the likely consumer interpretation of the advertising claim”.

Given that ULaw had the most students, it was to be expected that it would have the most going on to training contracts, the ASA continued.

Further, the figures provided for the BPTC did not show that a higher proportion of University of Law BPTC graduates achieved ‘Outstanding’ scores and secured pupillage than any other BPTC provider.

The ASA said: “The University of Law had provided data relating to their own 2016 graduates but not for 2016 graduates of any other BPTC provider. We therefore considered the 2015 figures from the Bar Standards Board provided the most up-to-date comparison.

As regards student satisfaction, ULaw was using figures comparing itself to the results for all subjects offered by universities when it should have compared itself simply to law faculties.

By this measure, ULaw was ranked sixth in the sector for overall satisfaction and third for teaching quality.

“We considered, however, that consumers would interpret a ‘leading claim’ based all, or in part, on student satisfaction scores to mean that the University of Law was ranked highest.

“Because we had not seen evidence which supported the likely consumer interpretation of the claim ‘the UK’s leading law school’, we concluded the claim was misleading.”

This was a breach of the rules on misleading advertising, substantiation and comparisons with identifiable competitors.

The ASA also upheld a complaint against an advert for ULaw on the website Educompare.com that said in the first five years of work a lawyer could expect to earn an average of £54,000 a year.

It found this figure misleading because it came simply from an article in the Daily Telegraph, which the ASA said was not enough on its own to substantiate the claim without considering the quality of the underlying research.

Also, the advert looked like a news article and was “not obviously identifiable as a marketing communication”, another breach of its code.

The ASA ordered that the adverts must not appear again in their current form. It told ULaw not to make claims about the potential earnings of lawyers without “adequate evidence to substantiate the claims”, and to ensure marketing communications were obviously identifiable as such.

“We also told the University of Law Ltd not to make claims that they were the ‘leading’ law school in the UK unless they held adequate substantiation, and, if such claims were based on the number of places or students enrolled, that the claim was clearly qualified to that effect.”