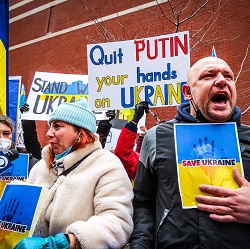 Ukraine protest: Lawyers in the spotlight too

Pressure to take action against law firms who act for oligarchs and companies connected with the Russian state is increasing from MPs, peers and journalists.

In a debate about Ukraine on Friday in the House of Lords, QC Lord Carlile said it was “probably fair to say that there is a host of law firms that have been involved” in the so-called London laundromat – helping Russians launder money.

“I suggest to the minister that we should now create a register of lawyers’ activities for Russian citizens and their strong connections as an adjunct to the new National Security and Investment Act system, which was introduced in recent weeks.”

Liberal Democrat peer Baroness Kramer described access to the financial and legal services of the City of London as “one particular lever that we especially control”.

She continued: “We also control a lever – I am almost ashamed to say – and that is access to the money laundering capabilities of the City of London, widely known as the London laundromat…

“We also have to bring to book the enablers of money laundering, including the legal firms, the accountants, the banks, the property agents and the developers.

“That network is laced with respectable names, and many are very well connected throughout the current political establishment.”

She said the new kleptocrat unit at the National Crime Agency (NCA) should be tackling these enablers and urged ministers to commit “immediately” to introduce ‘failure to prevent’ legislation.

Crossbencher Baroness Wheatcroft said freezing the assets of Russian banks was only a start.

“The huge fees paid to bankers, lawyers and accountants to bring companies to market seemed an incentive for them to see the best, not the worst, in those companies. Now we need to be assured that these companies properly deserve a listing on our stock market…

“We also have to look at the highly commercial approach of some of our major law firms.”

She pointed to a well-known law firm which marketed the availability of Russian-speaking lawyers as part of its service to help clients comply with money laundering rules.

Meanwhile, the day before, in the House of Commons debate on Ukraine, Conservative MP Bob Seely called for action to be taken “to stop unscrupulous law firms from offering intimidation services to oligarchs and kleptocrats”.

Mr Seely has been focusing on the action of such law firms, telling a Commons debate on ‘lawfare’ last month that the government needed to “end the cancer” of high-end law firms selling “intimidation services” to oligarchs.

Separately, senior Labour MP Ben Bradshaw tweeted on Friday that Foreign Secretary Liz Truss had told an MPs’ briefing that “sanctioning Putin’s oligarchs is being held up by their London law firms challenging the move”. He called for the government to name these firms.

Jessica Simor QC tweeted: “Law firms can’t hold it up. Only a court could. Are there any court orders? I doubt it. I doubt she is telling the truth – or she is ill-advised by her own lawyers.”

However, Susan Hawley, executive director of the group Spotlight on Corruption, noted that, under section 23 of the Sanctions and Anti-Money Laundering Act 2018, the targets of sanctions “may request the minister revoke the designation”.

She said it seemed “very likely” that London lawyers would be “haggling” with the Foreign Office about clients facing designation.

Mr Bradshaw, she added, “is right to call for them to be named and shamed for doing so”.

In The Guardian on Saturday, columnist Nick Cohen attacked the cost involved in defending legal actions brought by oligarchs to shut down debate.

“If we were capable of feeling shame at the misery that Britain’s corruption inflicts on the world, we would radically reform the law,” he wrote.

“We would move closer to a continental legal system. We would make judging a career in its own right and phase out the recruitment of judges from the ranks of barristers and solicitors, who appear to think obscene costs are reasonable.

“We would stop selling English law as a luxury service in the global marketplace and say its first duty should be to meet the needs of the people of this country. And we would impose limits on the fees the lawyers of the super rich can charge in the high court.”

He concluded: “As Russian tanks roll across Europe, a true cause for anger and shame is that at no point have we had a public debate about whether we want a future where we are living off immoral earnings and are so frightened of immoral lawyers we no longer dare describe what this country has become.”

Finally, both the Solicitors Regulation Authority and Council for Licensed Conveyancers (CLC) have issued warnings to law firms to ensure they are up-to-date and comply with the latest sanctions that have been imposed on Russia-linked individuals and businesses.

The CLC said this was “not an issue that will go away soon”.

The regulator explained: “If anything, it will be growing in importance due to recent events. Sanctions, economic crime and anti-money laundering were already areas of increasing focus, and there will naturally be more of a spotlight on these issues from government, regulators, and the media, along with some consumer groups.”