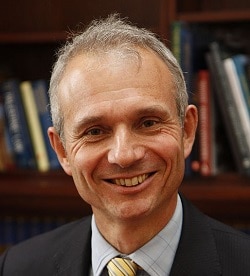 David Lidington has become the fourth Lord Chancellor and Secretary of State for Justice in just over two years after Liz Truss became the only member of the cabinet to be demoted following the election.

Mr Lidington, also the fourth non-lawyer to hold the post after Chris Grayling, Michael Gove and Ms Truss, has got his own department for the first time after being appointed leader of the House of Commons last July when Theresa May became prime minister.

In a statement released last night, Mr Lidington said: “I am pleased and honoured to have been appointed as Lord Chancellor and Secretary of State for Justice.

“Together with my ministerial team, I look forward to working with the hard-working and dedicated staff in our prisons and probation services, in our courts and tribunals and with people right across the justice system.

“Democracy and freedom are built on the rule of law, and are protected by a strong and independent judiciary. I look forward to taking my oath as Lord Chancellor, and to working with the Lord Chief Justice and his fellow judges in the months ahead, to ensure that justice is fairly administered and robustly defended.”

Ms Truss, who lost the confidence of the legal profession by failing to stand up for the judiciary from newspaper attacks during the article 50 court case, has become chief secretary to the Treasury, the number two to the Chancellor of the Exchequer. As such she will attend cabinet, but not as a full member.

There she replaces David Gauke, a solicitor at City firm Macfarlanes before he was elected in 2005, who has become work and pensions secretary. Attorney General Jeremy Wright QC has retained his post.

Mr Lidington graduated in history from Cambridge University and then completed a doctorate in Elizabethan history. His PhD was entitled ‘The enforcement of the penal statutes at the court of the Exchequer c.1558-c.1576’.

He then worked in industry for BP and Rio Tinto before being appointed in 1987 as special adviser to the then Home Secretary Douglas Hurd. He moved to the Foreign Office in 1989 when Mr Hurd was appointed Foreign Secretary.

After holding various shadow positions, he was appointed Europe minister in 2010, a post he held until last year.

He has had little connection with legal issues to date. His voting record shows, unsurprisingly, that he supported his party’s moves to limit legal aid, although there is some confusion about his position on the Human Rights Act.

A link to the monitoring website TheyWorkForYou has been circulating which indicates that he voted in favour of repealing the Act.

However, a closer examination shows that he was voting against a Labour amendment to last year’s Queen’s Speech that featured several criticisms of the government, including a call for it “to abandon its misguided proposals to repeal” the Act. In that context, it does not appear to be a positive push for repeal.

In late 2015, the Financial Times reported that he was a supporter of the European Convention on Human Rights.

In a blog around the same time to mark Human Rights Day, Mr Lidington wrote: “As the Minister for Europe, one of my central responsibilities is to promote and support the protection of human rights throughout Europe.

“One issue I care strongly about is access to justice for all. Through diplomacy and financial support across the region we are working hard to ensure that people’s rights to equality before the law and to a fair trial are protected and upheld.”

Last December, he spoke out against “political considerations” entering into the judicial appointments process amid the furore around the article 50 case.

The immediate response to his appointment from legal observers on Twitter was positive.

This refers to section 2 of the Constitutional Reform Act 2005, which says: “A person may not be recommended for appointment as Lord Chancellor unless he appears to the Prime Minister to be qualified by experience.”

Leading legal journalist Joshua Rozenberg tweeted: “This strikes me as a very promising appointment. Very good to have a lord chancellor with a sense of history. Hope he’ll stay the course.” Bob Neill, the Conservative MP who chaired the justice select committee in the last Parliament, tweeted his agreement with this assessment.

Mr Rozenberg added: “As lord chancellor @DLidington must deal with the judges. They’ll respect his intellect and experience. They had no respect for @trussliz.”

Whether Mr Lidington will press ahead with policies such as personal injury reform, changes to the discount rate and separating legal regulators from representative bodies will become clearer in the coming weeks, possibly next Monday in the Queen’s Speech.

His record indicates support for the various restrictions on conditional fee agreements introduced over the years. Back in 2000, he said in a House of Commons debate that he feared “the growth of a culture of litigation and compensation mirroring some of the worst examples that we have seen across the Atlantic”.

He has some knowledge of the arguments around regulation. He piloted the Chiropractors Act 1994 through Parliament, placing practitioners on a professional, self-regulated basis for the first time.

Mr Lidington was caught up in the MPs’ expenses scandal, with the Daily Telegraph highlighting his regular claims for cleaning, even sending his bath mat and towel to be professionally washed, and also his claim for toiletries, such as L’Oreal moisturiser.

He admitted that some claims could be seen as “over-generous” and repaid them.

Away from Parliament, his main claim to fame is that he captained the Sidney Sussex College, Cambridge University Challenge team to victory in 1979. Then, in 2002, to mark the 40th anniversary of the show, he captained the team again to win a champion of champions tournament.