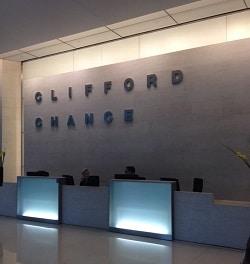 The Solicitors Disciplinary Tribunal (SDT) has expressed surprise that City giant Clifford Chance was not charged with a lack of integrity or acting recklessly in its conduct of the Excalibur case, it has emerged.

However, despite being “very troubled” by the limited nature of the allegations of misconduct made by the Solicitors Regulation Authority (SRA), the tribunal concluded that it could not go behind the charge sheet put forward by the regulator.

A month ago, it was announced [1] that the City giant and partner Alexandros Panayides had agreed to pay fines of £50,000 each after admitting three allegations concerning the funding of the infamous litigation.

The SRA, Clifford Chance and Mr Panayides negotiated a statement of agreed facts and outcome to conclude the proceedings. This avoids a full hearing but requires the SDT’s approval.

The detailed ruling, published just before Christmas, showed that the SDT initially refused to approve the statement on the papers.

A private hearing before a differently constituted tribunal was then held, at which the agreed outcome was approved.

However, the ruling showed that this tribunal was concerned particularly with the allegation that Mr Panayides sent to a third-party litigation funder a preliminary evaluation of the case that on its face was produced by Clifford Chance, without telling the funder – Psari Holdings (called Funder B in the ruling) – that a director of Excalibur (called Client A) had actually prepared the first draft.

Clifford Chance and Mr Panayides sought to downplay the seriousness of this omission by pointing out that the solicitor reviewed and amended the first draft, “such that he was satisfied that it fairly and accurately reflected the views of himself and Client A’s legal team”.

Further, they argued, even if they had told the funder, it would have likely just sought confirmation that the preliminary evaluation accurately reflected Clifford Chance’s views.

The SDT was clearly not satisfied by this. It said: “The tribunal was concerned that the charges brought against each respondent provided no scope to examine whether it was proper for solicitor to allow his/her client to write an assessment of the merits of the client’s case for the purpose of obtaining third-party funding at all, irrespective of the amount of such funding and whether the solicitor agreed with the assessment or not.

“The tribunal was of the view that this approach would trouble both the profession and the public if they had knowledge of it.

“In addition, there were, surprisingly, no allegations of lack of integrity, recklessness nor acting contrary to Principle 6 of the SRA Principles 2011 (behaving in a way that maintains the trust the public places in you and in the provision of legal services), which the tribunal would normally expect to see in cases of this nature.”

The SDT also noted that no harm had been alleged, even though the funder had to issue proceedings to secure compensation for its losses.

It further observed that “striking” similarity between the so-called rule 5 statement – the charge sheet produced by the SRA – and the statement of agreed facts and outcome.

In response to the tribunal, the SRA said it did not “positively assert that harm was caused, but nor did it assert there was no harm caused… The allegations were serious enough in themselves without it being necessary to assert that any harm was caused”.

The SDT also asked why it was thought appropriate to go to a director of the client rather than seek an independent opinion, and whether this constituted a governance failure at Clifford Chance.

The firm argued that it was not and that the evaluation did represent Mr Panayides’s “genuine views of the case”.

But in any event, the firm argued that the tribunal could only consider what was alleged, and ultimately the SDT agreed.

It said case law showed that the tribunal was “clearly restricted to considering only those allegations that had been pursued by the SRA in the rule 5 statement, together with the statement of agreed facts and outcome.

“It could not enquire into matters that it considered ought to have been included in the rule 5 statement or give directions about those matters. The prosecutor was the SRA, not the tribunal.”

The ruling put context behind the separate admission that Clifford Chance operated under an unlawful and unenforceable conditional fee agreement (CFA).

It explained that the CFA was drafted in contemplation of arbitration proceedings in New York, where it was a “perfectly acceptable document”.

Later, protective proceedings were issued in England and Wales, and a new, compliant CFA was put in place, although the respondents admitted that this did not happen as quickly as it should have done.

The tribunal found the seriousness of this misconduct and the respondents’ culpability to be low.

The third allegation concerned payments made by the firm out of monies advanced by litigation funders which were in breach of the funding agreements and/or could not now be properly evidenced. Clifford Chance has repaid to the funders around £500,000 as a result.

In concluding that the agreed outcome was appropriate, the tribunal said that Clifford Chance and Mr Panayides “ought reasonably to have known that the conduct complained of was in material breach of their obligations to protect the public and the reputation of the legal profession”.

There were also “a large number” of mitigating factors, including “very significant personal difficulties” that Mr Panayides had faced at the time.

The timeline of the case was also noteworthy. The High Court ruling which sparked the SRA’s initial investigation was handed down and widely reported in December 2013.

The SRA notified the firm that it intended to launch an investigation on the back of the ruling in April 2014, but this did not begin until March 2015.

The SRA ultimately found no issues of regulatory concern around the conduct of the litigation, but also in March 2015, Clifford Chance informed the SRA of the issues that ultimately led to the tribunal ruling.

The negotiations over the agreed outcome took place between March and September 2017.