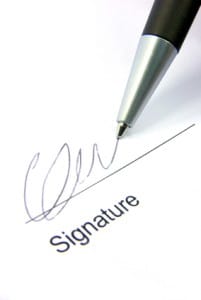 Agreement: in almost all cases compliance has been excellent

The Solicitors Disciplinary Tribunal (SDT) has for the first time sanctioned a solicitor who breached a regulatory settlement agreement (RSA) that ended a Solicitors Regulation Authority (SRA) investigation into him.

The SRA reported yesterday that Anthony Thomas Bryson, of Grey Street Lawyers, Newcastle Upon Tyne, was suspended from practice indefinitely and ordered to pay £20,000 in costs.

Mr Bryson entered into the RSA in May 2010 in relation to unjustified deductions he made from the damages of two employment clients. These were described as a ‘broker’s fee’ for the work referrer, Justice Direct. He made admissions in the RSA and undertook to make all reasonable efforts to trace and contact the affected clients. As a result, he was severely reprimanded for multiple breaches of the Solicitors Code of Conduct 2007.

Mr Bryson was referred to the SDT for failing to comply with the terms of the RSA, and for a number of other breaches, such as failure to comply with a Legal Complaints Service direction and to provide his client with information about costs.

Shortly before the tribunal hearing, the SRA said he suggested a further RSA which would include partial admissions and an agreement to remove his name from the roll. The SRA rejected this.

Mr Bryson admitted all the allegations before the tribunal. The SDT said it was very concerned that Mr Bryson had been prepared to enter into an RSA and undertake to make payments when, shortly before finalising the agreement, a £300 cheque that he had sent to a client had been returned to his bank as unpaid.

The SDT said Mr Bryson’s good faith must be open to question. Mr Bryson was suspended from practice for an indefinite period and ordered to pay the SRA’s costs of £20,000. Mr Bryson is still within the time period to appeal against the judgment.

The SRA said: “This was the first case we have taken to the SDT where a party to an RSA has not complied with its terms. In almost all cases, compliance with the terms of an RSA has been excellent.”