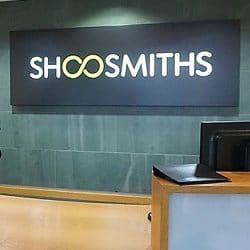 A former employee of national law firm Shoosmiths – who was awarded £1,000 in damages for harassment back in 2017 – has had a string of further claims thrown out, with an employment tribunal branding them vexatious.

Nigerian-born former administrative assistant Bosede Sule, who worked in the firm’s Manchester property department for eight months before his dismissal in July 2016, received her award after another member of staff standing by her desk said that “struggling immigrants should go back to their country”.

She was awarded the damages for injury to feelings, but her other claims of discrimination and victimisation over the handling and outcome of her subsequent grievance and dismissal were rejected, as was her appeal in March 2018.

In October 2018, a tribunal rejected three further claims of discrimination and harassment as an abuse of process as they were out of time and in some respects covered the same ground as the original claims.

The latest tribunal was dealing with 14 further claims, all but one of which related to events that occurred during her employment.

Employment Judge Ryan said he had already struck out some of them as beyond the tribunal’s jurisdiction, because they covered issues such as malicious communications, conspiracy, defamation, and perverting the course of justice.

He said that, while he was “not entirely persuaded” that the a litigant in person’s claims amounted to a “campaign” against Shoosmiths, it “does not necessarily have to be done with that intention if the effect of it is to subject the defendant to inconvenience, harassment and expense out of all proportion to any gain likely to accrue to the claimant”.

The judge said the “inconvenience and expense” for the law firm of having to deal with the proceedings was “self-evident”.

He said there was also a “degree of harassment in that allegations have made against several individuals and communications had with them directly”, which were “on any view, out of all proportion to any gain likely to accrue to the claimant”.

This was despite her being asked on several occasions only to correspond with Shoosmiths’ solicitor. Ignoring this appeared to be a deliberate tactic and caused “unnecessary distress” to the individuals, the firm said.

The judge said Ms Sule “did not seek to resist” or argue that these claims should not be struck out.

As well as her tribunal proceedings, the court heard that she had complained about Shoosmiths to the Solicitors Regulation Authority, a complaint that was “closed without action”.

This was followed in August and September last year with “multiple complaints” about the Shoosmiths staff named in her legal proceedings to the Legal Ombudsman, the Chartered Institute of Legal Executives and Council for Licensed Conveyancers.

Judge Ryan noted that the complaints were all raised over three years after Ms Sule had stopped working for Shoosmiths.

He concluded that all Ms Sule’s latest claims apart from one were vexatious and constituted an abuse of process – even though he noted that Shoosmiths itself had not at any stage suggested that, or sought to recover its costs.

He said that “making repeated claims about the same employment” three years after earlier hearings determined the issues was “undoubtedly using the process in a way which is significantly different from the ordinary and proper use of the process”.

On the one outstanding issue of discrimination raised by Ms Sule in response to a letter from Shoosmiths last summer, Judge Ryan agreed with Shoosmiths that it had no prospect of success.

The judge added that “given the history of the litigation and related matters”, any tribunal was likely to conclude that the reason for the treatment complained about was “in no sense whatsoever because of race”.

He concluded that all Ms Sule’s latest claims should be struck out.