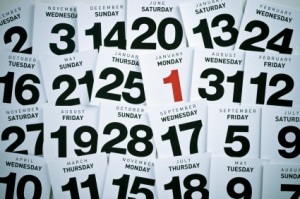 Dates: there were reasons for missing the nominations deadline

In what is believed to be the first appeal against a sanction imposed by the Solicitors Regulation Authority (SRA), the Solicitors Disciplinary Tribunal (SDT) has revoked the decision to rebuke a solicitor and his firm over alleged failures to nominate compliance officers in time and disclose a suitability issue.

In a strongly worded ruling, the tribunal found that the SRA adjudication panel – which upheld an initial decision by an adjudicator to issue a written rebuke – “took insufficient account” of the available information and evidence about what happened with Nizmul Haque, sole principal of London firm Hafiz & Haque.

Since 2011 the SRA has been able to issue rebukes and fines of up to £2,000, but with the power came a right for solicitors to appeal to the SDT.

The SRA panel found that the firm failed to nominate Mr Haque as COLP and COFA by the original deadline of 31 July 2012 and failed to respond to a written notice, reminders and communications.

However, Mr Haque had sent a written nomination on the deadline, which the SRA said it had no record of receiving, and the SDT found there was no clear evidence the SRA had properly communicated that nominations could only be made online.

The evidence did show that the SRA sent subsequent unanswered e-mails to Mr Haque’s personal address, rather than that of the firm, but when it sent an e-mail in December 2012 to the right address, he responded promptly.

The panel had decided that despite the e-mail errors, the firm had been on notice of the need to appoint compliance officers and should have contacted the SRA to find out what was happening.

The ruling continued: “The tribunal questioned the purpose of the SRA spending time and money sending e-mails to members of the profession setting out the process for nomination if it was unimportant that the intended recipients received the e-mails so that they could act on them.”

In respect of the finding that the firm did not have a COLP and COFA in place by 1 January 2013 as required, the SDT said the December e-mail had been the first time the SRA had provided a link to complete the nominations.

“The appellants could not comply with the process without receiving the link and personalised password to effect the online nomination. In the view of the tribunal, the adjudication panel had not paid sufficient notice to the explanations provided. The tribunal found those explanations to be reasonable in all the specific circumstances of this case.”

The panel had also rebuked Mr Haque for failing to disclose a previous SRA reprimand as a character and suitability issue to be the COLP and COFA. He argued that it was a genuine mistake as he assumed the SRA would know about an action that it had taken; further, his mother had died in the five-day period between receiving the form and returning it.

The tribunal said that in those circumstances “it was unsurprising that a mistake had been made”, and considered that the way the form was worded, it was not unreasonable for Mr Haque “to assume that the SRA knew of its own decisions, and that the question therefore related to other regulators”.

It added: “It seemed to the tribunal reasonable for a solicitor to apply his mind to answering the questions and, in exceptional circumstances, to make an innocent mistake without being referred to an SRA adjudicator.”

Despite having overturned the decision anyway, the tribunal went on to criticise the panel’s finding that Mr Haque’s conduct had been reckless, saying this was “largely incompatible” with the finding that it was not deliberate, intentional or purposeful. “In any event, the adjudication panel had provided no reasons to substantiate their finding that the conduct was reckless at any point in their decision.

“They should have done so; this failure was wrong and a serious procedural irregularity.” The panel had also given insufficient reasons for the decision to issue the rebukes.

More generally the tribunal observed that the panel failed to follow its own rules because it conducted a rehearing rather than a review of the decision under appeal; it also criticised typing errors in the panel’s decision “which did not assist in understanding with clarity the reasons for [it]”.

The tribunal, however, said the appellants would need to “up their game” in relation to regulatory obligations in future.

The issue was also raised about which standard of proof the SDT should work to. The SRA panel applied the civil standard, while the SDT uses the criminal standard. But having taken submissions, the tribunal said its findings were made regardless of the standard of proof and so it did not need to decide the point – it was a discussion “which would have to wait for another day”.

This is the second decision which Hafiz & Haque has notably overturned, having last year brought a successful judicial review that struck down an “unlawful and irrational” Legal Ombudsman decision to reduce its fee and compensate its client.