“Trial by internet” – Judges turn to Wikipedia to aid reasoning 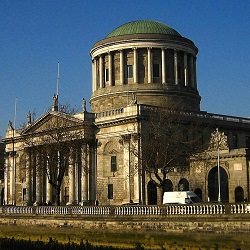 Supreme Court of Ireland: Few decisions on Wikipedia before experiment

Judges are using Wikipedia to research legal issues and allowing it to influence their reasoning, ground-breaking research has discovered.

Researchers said their findings showed the need for an easily accessible source of knowledge that was also authoritative in common law jurisdictions.

Following research in 2018 by the Massachusetts Institute of Technology (MIT) about the impact of articles on chemistry posted on Wikipedia, the team at its computer science and artificial intelligence laboratory was approached by Brian McKenzie, an associate professor at Maynooth University in Ireland, about a further experiment with Irish Supreme Court cases, only a few of which were detailed on Wikipedia.

Law students wrote over 150 articles on Irish Supreme Court decisions; half were randomly chosen to be uploaded to Wikipedia, with the other half kept offline.

Researchers found that judicial citations of the cases on Wikipedia as precedents increased by a statistically significant 22%, saying that randomisation element of the exercise meant the effect was causation and not just correlation.

There was also a statistically significant textual similarity – including when direct quotations were removed – indicating that the Wikipedia articles were not just being used by judges as merely a stepping stone to other, more authoritative sources that might be used to verify the relevant information.

This showed “that the contextualisation of the case by law students on Wikipedia is itself influencing judicial reasoning”.

The Wikipedia articles were generally used by judges of first instance to bolster their conclusions.

Researchers said this suggested that they were used more by judges or clerks who have a heavier workload, “for whom the convenience of Wikipedia offers a greater attraction”.

Their paper said: “Taken together, these results indicate that, sometimes, judges are deferring to Wikipedia rather than applying their own legal expertise as they craft decisions.

“For the moment this effect in Ireland has a natural ceiling, because the number of Irish court judgments on Wikipedia remains small.

“But in other jurisdictions, such as the United States, many more cases have already been added to Wikipedia. This suggests that, across many common-law jurisdictions, Wikipedia (and, by extension, the legal analysis of unknown internet users) might already be playing an important role in shaping judicial decisions.”

The researchers were worried that judges were “devolving responsibility for interpreting the context and importance of legal decisions to an unknown cadre of Wikipedia article authors”.

They continued: “At best, this risks inexpert analysis. At worst, it exposes judgments to bias and the tampering of external actors. Faced with such a high cost, and the resultant threat to legitimacy, one might hope that judges would forgo using Wikipedia as a source of legal information.

“Yet judges (and their clerks) are human and are confronted with overfilled dockets that demand expediency, and so they might be tempted to use Wikipedia. Our findings show that they do.”

The findings highlighted “a gap that needs to be filled” – an easily accessible source of knowledge that was also authoritative.

The paper said this could be addressed by “buttressing the reliability and review” of Wikipedia content by including lawyers as supervising editors to certify page quality, or by “augmenting the content of authoritative but less-broad sources, and using those for the provision of legal information about particular jurisdictions”.

A possible model was the US-based Oyez Project, which offers free synopses of recently published decisions of the US Supreme Court and Court of Appeal that were authored or editorially supervised by lawyers.

“Our experiment reveals that initiatives along these lines would be valuable and that they might help protect the foundational expectation of how legal decisions ought to be made: that they should be based on carefully-considered expertise about what laws and precedents say, and never be at the mercy of internet ghost-writers.”

MIT lead researcher Neil Thompson said the results highlighted an important public policy issue: “With a source that is as widely used as Wikipedia, we want to make sure we are building institutions to ensure that the information is of the highest quality.

“The finding that judges or their staffs are using Wikipedia is a much bigger worry if the information they find there isn’t reliable.”

Paper co-author Brian Flanagan, an associate professor at Maynooth University, said: “For the many potential cracks that have opened up in our ‘information superhighway’ that is the internet, you can imagine that this vulnerability could potentially lead to adversarial actors manipulating information.

“If easily accessible analysis of legal questions is already being relied on, it behoves the legal community to accelerate efforts to ensure that such analysis is both comprehensive and expert.”