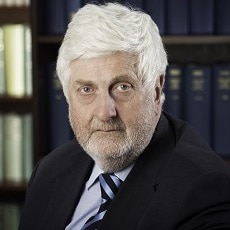 The head of the Scottish Bar has referred himself to the Scottish Legal Complaints Commission (SLCC) after being caught talking on a train about his client, Alex Salmond, in a derogatory manner.

In a video obtained by the Sunday Times, Gordon Jackson QC, dean of the Faculty of Advocates – the Scottish equivalent of the Bar Council – is heard saying: “I don’t know much about senior politicians but he was quite an objectionable bully to work with in a way I don’t think Nicola [Sturgeon] is. I think he was a nasty person to work for… a nightmare to work for.”

He then appeared to say Mr Salmond could be seen as “a sex pest but he’s not charged with that”.

The paper said the conversation took place in a standard carriage and was filmed by another passenger. It was during the trial and Mr Jackson talked about how his plan was to “put a smell” on one female witness. He also named two of the accusers, whose identities are protected by a court order.

A jury in Edinburgh last week found Mr Salmond, the former leader of the SNP and first minister of Scotland, not guilty on 12 charges of sexual assault, while another was not proven.

In a statement tweeted out by the Faculty of Advocates, Mr Jackson said: “I have decided that the proper course of action is to self-refer this matter to the Scottish Legal Complaints Commission, and that has been done. It will be for the commission to consider this matter.

“To be clear, however, I do not regard Alex Salmond as a ‘sex pest’, and any contrary impression is wrong. I also deeply regret the distress and difficulties which have been caused, but given the reference to the SLCC it would not be appropriate to comment further.”

Roddy Dunlop QC, vice-dean of the faculty, said: “The Faculty takes this matter extremely seriously. It plainly warrants investigation, but as the Dean has self-referred to the Scottish Legal Complaints Commission, it would not be appropriate for the Faculty to comment further.”

It is not clear from the SLCC’s rules whether a lawyer can refer themselves in this manner.

In his closing speech to the jury, Mr Jackson said that Mr Salmond’s behaviour towards his staff was at times inappropriate but not criminal.