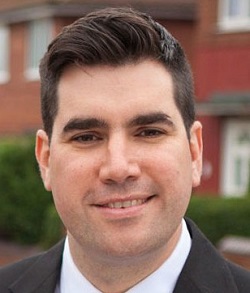 A former employment solicitor at trade union firm Thompsons who was only elected as an MP last year was yesterday named the Shadow Lord Chancellor and Secretary of State for Justice, as Labour leader Jeremy Corbyn replaced most of this shadow cabinet after the unprecedented string of resignations.

A self-proclaimed socialist and one of the MPs who nominated Jeremy Corbyn for the Labour leadership, Mr Burgon, who is 35, caused a stir when he was sworn in as an MP by prefacing his oath of loyalty to the Queen with a call for the monarchy’s abolition. “As someone that believes that the head of state should be elected I make this oath in order to serve my constituents,” he said.

He has been prominent in speaking up for his leader in recent days, posting on Facebook yesterday: “It’s important Labour members understand this sad truth: some coup-backing Labour MPs fundamentally opposed to Jeremy Corbyn and his ideas are doing what they are doing precisely because they want to drive party members to resign in disgust at their behaviour.

“They want you to play into their hands by resigning in ‘protest’ so that they can return to the Blair-inspired ‘business as usual’ which offers a big future for them but no future for Labour or the communities Labour exists to represent. Don’t give them the satisfaction.”

Writing on the Labour List website over the weekend, the solicitor also spelt out his support for an anti-austerity agenda: “There is no future for Labour in a retreat from opposition to austerity. A return to acceptance of the neo-liberal economic framework which has seen good manufacturing jobs go abroad, wages and terms and conditions hit hard, public services damaged, getting a council house or a mortgage reduced to just a pipe-dream for millions and increasing resentment at the political process will spell the end of the Labour Party as a party which can connect with ordinary people.”

Mr Burgon was the first member of his family to go to university, studying law at Cambridge, where he was chair of the Cambridge University Labour Club.

However, longstanding shadow justice minister Andy Slaughter has resigned, saying in his letter to Mr Corbyn that with a “likely” autumn election and the Brexit negotiations looming, “I don’t think you are the best person to maximise our support in the country or combat the very right-wing forces that have taken over the Tory Party”.

Meanwhile, another former Thompsons lawyer, Mick Antoniw, was yesterday named counsel-general to the Welsh Assembly – the equivalent of the Attorney-General. He is the Labour Assembly member for Pontypridd. Before his election, Mr Antoniw was a senior partner at Thompsons, specialising in industrial disease and serious injury cases.