Tory debate solicitor suspended for tweet “was being sarcastic” 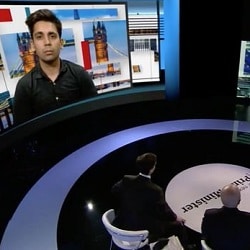 Aman Thakar was suspended from his job as an employment lawyer at London law firm Leigh Day after it emerged he had sent what appeared to be a tweet condoning nationalism in the context of Adolf Hitler.

Mr Thakar had the final question on the programme, asking the candidates when they would call a general election, given that they would have no mandate from the people to be prime minister.

Yesterday, the focus was initially on the revelation by political gossip website Guido Fawkes that Mr Thakar had been a Labour Party council candidate last year in Southwark and also “worked in Labour HQ”, where he dealt with complaints about antisemitism. The website cited an unnamed source describing him as “uber partisan”.

It soon followed this up with a screen shot of a tweet Mr Thakar sent in February that said: “Hitler’s abuse of the term nationalism is, to me a nationalist, the most harmful part of his legacy.”

This triggered action from Leigh Day. A spokesman said: “We can confirm that Aman Thakar is currently a solicitor at Leigh Day in our employment department. We have been made aware of a tweet which we are taking very seriously.

“Mr Thakar has been suspended with immediate effect from the firm whilst we carry out an internal investigation into these matters.”

Mr Thakar has since issued a tweet in which he sought to provide context for his February message, adding: “My full and sincere apologies for any offence caused.”

He explained that he was responding to a tweet about American conservative commentator Candace Owens, who had attracted attention on social media that day with a video in which she said she did not have “any problems at all with the word ‘nationalism’”, a word she said was too often associated with Hitler when in fact Hitler’s ambitions were “not nationalism”.

Mr Thakar said his tweet was a “sarcastic” response and “not my point of view”.

The Campaign Against Antisemitism said earlier in the day that it was referring Mr Thakar to the Solicitors Regulation Authority.

In response to criticism about choosing a Labour supporter to ask a question, the BBC said: “[The] questioners held a range of political views and we did not specify these views nor their backgrounds although some chose to do so themselves.

“The last questioner on the debate is a solicitor who was seconded by his law firm to the Labour Party in the past, rather than being a Labour ‘staffer’. He is a Labour supporter and once stood as a councillor.”