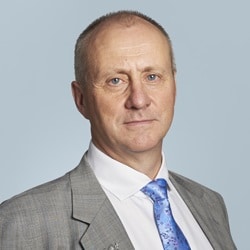 The former Counsel General for Wales has struck out on his own as a sole practitioner and embraced direct access, saying it is “bordering on Luddite” for barristers to ignore it.

Theo Huckle QC said he undertook the Bar Council’s public access course during lockdown after learning that almost 25% of all the earnings of the Bar are now from direct access instructions.

“I thought this was a development I was standing outside for no good reason. Direct access is happening and to ignore it is bordering on Luddite,” he told Legal Futures.

His aim, however, is to limit his direct access work to preliminary advice, “as I do not wish to conduct complex injury litigation and do not have the resources or systems to do so”.

Mr Huckle was a founder member of Civitas Chambers in Cardiff and in 2011 was named counsel general, the Welsh government’s law officer, soon after becoming a QC. He served for the full term of government until 2016, appearing four times in the Supreme Court, after which he returned to private practice at Doughty Street in London.

He has also recently taken over as chair of the Bar Council’s wellbeing at the Bar working group.

The barrister said that, after leaving government, “I resolved that every five years I would look hard at what I was doing and why”.

He saw the number of sole practitioners at the Bar rising and was receiving direct approaches anyway: “I fancy being in total control of it.”

Mr Huckle explained that he previously shied away from direct access out of concern that he would be competing with instructing solicitors.

“But the course leader, a solicitor himself, explained to us that that was not a real concern, and that the relationship between an instructing lawyer and a direct access barrister should be somewhat symbiotic.”

He said there were complex cases where solicitors need counsel’s advice to decide whether to take on a case.

“If the client is able to pay for that preliminary advice on a direct access basis, this can be a way forward for client and lawyer without the client being required to pay for both lawyers’ time obtaining that specialist advice, and without the first lawyer having to invest resources heavily in what may well not be a viable case legally.

“It may also be easier to send a disappointed prospective client away with the positive suggestion as to the option to obtain specialist advice, in cases where your immediate view is that there is no case.”

There was an “obvious reasonable expectation” that – where there was a case to be pursued – the client “will be encouraged to return” to the referring solicitor, presuming they were appropriate for the matter.

Mr Huckle said that, as a personal injury specialist, he did not often have conferences in chambers, and pointed out that many barristers do not go into chambers very often. He would travel to Doughty Street for management meetings but lives near Newport.

He still expected to enjoy the camaraderie of chambers, though: “It’s not been suggested that I won’t be invited to the parties.”