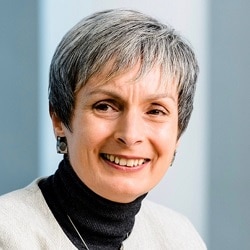 Martin: No need for further regulation of in-house lawyers

A leading general counsel has attacked the assumption that in-house lawyers “leave their morals at the door” when they join their companies.

Rosemary Martin, group general counsel of Vodafone, also said general counsel faced the challenge of sorting through the innovation that was happening in the legal market.

Speaking at a Tech Nation webinar on legal services after Covid-19, Ms Martin was asked about the ethics of in-house lawyers, with the question referencing Professor Stephen Mayson’s recent report on reform of legal services regulation and his proposal that in-house legal departments should be regulated in the same way as law firms.

“There seems to be an assumption in academia that in-house lawyers leave their morals at the door,” Ms Martin said.

“Lawyers who have gone through a professional qualification should carry with them the ethical standards that they learnt during their education. If they are not learning those things, there is a problem.”

She added that in-house lawyers “did everything they can” to ensure that their companies were sustainable in the long term and their role was directly connected to environmental, social and governance (ESG) criteria.

“In-house lawyers already perform that role and I don’t think they need any further regulation to do so.”

She continued that both law firms and clients were responsible for driving change in the industry.

“Some clients are interested in their own ideas, others are happy to take innovations from law firms,” she said.

“One of the big challenges for general counsel is to understand what is out there and what works. It’s a nice problem to have.”

Meanwhile, the direct impact of the coronavirus crisis could be seen in clients’ “need for speed”, Ms Martin continued, and a “relaxation in quite a lot of the formality of the courts”, which was suitable for business disputes but maybe not for family law.

Jeroen Ouwehand, global senior partner of Clifford Chance, said a partner in the firm had compared the impact of the virus to “losing a limb”, which had three phases: the immediate shock; the period when you realise there is still a lot you can do; and the third phase when you realise what you have lost.

Mr Ouwehand described it as an “interesting analogy” and said he believed the market was still in the second phase.

Judy Perry Martinez, president of the American Bar Association, said the virus had resulted in a “remarkable transformation” in the USA, with courts “demonstrating leadership” and lawyers showing a “signal ability to absorb technology in a way they never have”.

Ms Martinez said that “probably the most remarkable thing” was the “keen awareness” now shown by attorneys to hear what the “customers of justice” wanted.

Gina Miller, the wealth management specialist who took two successful challenges to the Supreme Court on Brexit in 2016 and the prorogation of Parliament in 2019, said the legal profession had “underserved the market” by being “too expensive and too remote”.

Asked what she thought was the number one obstacle to access to justice, she replied: “It has to be the cutbacks in legal aid. Affordability is a big problem. Without that, there won’t be access to justice.”

Ms Martin agreed. “We lost something valuable when legal aid was cut so drastically. Huge damage was done.”