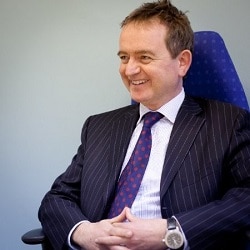 The former national head of family law at Simpson Millar has set up his own firm and chosen to be regulated by the Bar Standards Board (BSB).

John Pratley said the Bar regulator was a “good fit” for the business because it is “court-facing” and has little need of a client account.

Mr Pratley was a partner at Bristol firm Foster and Partners, which was founded in 1976 and bought by Simpson Millar in 2014. Initially head of family for Bristol and Cardiff, he then became national head.

His BSB entity, Apple Tree Family Law in Tiverton, Devon, was authorised last month. Since 2015, 93 entities have chosen BSB regulation, including others run by solicitors.

Speaking to Legal Futures, Mr Pratley said he believed family law was better delivered from a small firm and “the client I think benefits from having that much more individual approach”.

After consulting others who had opted for BSB regulation and spoken positively about their experience, he was convinced. The BSB was an “appropriate regulator”, as it was used to dealing with sole practitioners, he said.

He said the BSB was selective in who it authorised, preferring to regulate low-risk practitioners who did not handle client funds.

An advantage of being regulated by the BSB, he said, was that he had access to the Bar Mutual indemnity insurance scheme: “It has a very good reputation as an insurer and the premiums are lower as well.”

He said the BSB was a good regulator for “a small firm that is very involved in court-facing work; litigation and advice relating to litigation”.

Mr Pratley said he had put “a lot of preparation time” into making his application – between two and three weeks’ solid work in all.

He added: “It was a clear process and the people I dealt with were constructive, intelligent and reasonably supportive.

“I wouldn’t say it was an easy application to make but my impression was that the BSB handle these things very well and reasonably quickly.

“I put in my application in August and, after giving a positive preliminary indication within a week or so, the firm was approved in mid-October. So I felt they were prompt.”

He observed: “There just aren’t that many barristers so the whole thing is smaller scale and more personal.”

He concluded: “If I were to talk to somebody else who was contemplating making the same step, I would recommend them to think about going the same way.”