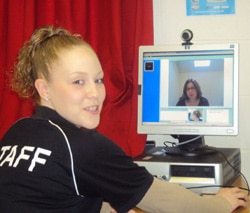 One of the country’s largest barristers’ chambers has joined forces with Instant Law UK, as it rolls out its library-based video-conferencing service.

Instant Law will next week also give library users access to what it claims is the country’s first interactive, online debt and employment law service, in conjunction with a London law centre.

As first revealed on Legal Futures, Instant Law has launched its service in Marylebone Public Library, followed by Birmingham Central Library, the biggest public library in Europe. A further 10 libraries in the Birmingham City Council area have been earmarked for the service.

Initially, users are put through to an Instant Law UK solicitor who will give the first advice free of charge; if a barrister is deemed appropriate for the case, St Philips Chambers will cover instructions coming out of Birmingham, while talks are ongoing with another major chambers in London to cover Westminster Council libraries.

The solicitor advice is provided by a mixture of in-house solicitors based at Instant Law’s Oxford call-centre, home workers and, where appropriate, firms in the HighStreetLawyer.com network.

Chris Owen, chief executive of St Philips Chambers, said: “When St Philips was invited to join this innovative service for the Birmingham public at large, I was delighted to accept. Our first case has proceeded well and produced a considerable saving for the client. I see this service becoming more popular as the public become accustomed to the facility and it also allows us to bring our law firm friends into a matter when the case warrants it.”

Instant Law UK has formed a commercial relationship with an established law centre in north London – whose name we have been asked to hold back for the moment – to launch the online debt and employment law service, provided by CCLC staff, next Monday.

“Providing this service through the library network in partnership with the law centre overcomes these problems and provides a professional advice service.”

Instant Law has also linked up to provide its services at OXSRAD, a charitable organisation providing integrated sports and leisure facilities in central Oxford. It has over 800 members.