To be an ABS, or not to be: Shakespeares becomes one of largest firms to gain licence 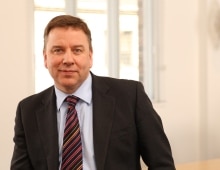 Wilson: non-lawyers at top give firm a competitive edge

National firm Shakespeares has become one of the largest law firms to date to become an alternative business structure (ABS).

The ambitious firm, led by chief executive Paul Wilson, has been on the acquisition trail in the last five years, with six mergers on the path towards its stated aim of a £50m turnover.

Mr Brown’s role is to drive up the firm’s operational efficiency after the mergers rapidly expanded the size of the Midlands-based business.

Mr Wilson, who is a vociferous advocate of non-lawyers running firms as businesses in the changing legal landscape, appointed Mr Brown – also a non-lawyer – as an equity partner equivalent to run the day-to-day operations.

But it is the addition of private banker Anne Tromans and quantity surveyor Keith Blizzard to the partnership that has prompted the ABS application, Mr Wilson said.

He added that the firm currently had “no specific plans” on exploiting the ABS status to bring in external investment.

However, Mr Wilson has previously said that the management board would concentrate on looking at further opportunities to build the business.

Mr Blizzard is a chartered quantity surveyor, arbitrator, adjudicator and mediator, with a background in construction. Ms Tromans advises on estate planning and worked offshore for a number of years.

Mr Brown’s background is in group strategy and developing business through identifying new markets and growth opportunities. Mr Wilson claimed having two non-lawyers sitting at the top of the management board gives Shakespeares an “innovative mindset” and “competitive edge”.

Shakespeares remains intent on growth, following last summer’s tie-up with Midlands neighbours Harvey Ingram. The enlarged firm posted best-ever turnover and profitability figures in 2011-12 and Mr Wilson has stated that further acquisitions are on the agenda for 2013.