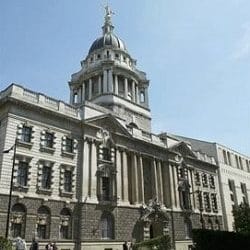 Owners of a business that falsely claimed it could supervise immigration law firms and made millions of pounds as a result, along with a director of one of those franchises, have been convicted at the Old Bailey.

Dan Romulus Dandes and Babbar Ali Jamil – the directors of DDR Legal Services LLP – and Zia Bi, director of Burlow & Spencer Ltd, were found guilty of six counts relating to 19 offences of providing unqualified immigration advice and/or services contrary to section 91 of the Immigration and Asylum Act 1999. The charges dated from 1 February 2016 to 30 April 2018.

A number of individuals and organisations signed up to the scheme, which was designed to circumvent regulation by the OISC or any other regulatory body.

The DDR website says “our licensees do NOT need to be regulated by the OISC or the SRA as they are acting on our behalf”.

It claims to have 18 licensees, who have processed nearly 67,000 applications and turned over almost £27m.

Mr Dandes told the court he provided advice to immigrants in the UK because he believed it was “100% legal”.

Burlow & Spencer was one of the companies claiming supervision by DDR, and its website says it employs “a team of highly qualified and extremely knowledgeable lawyers”.

But after receiving 95 complaints about the firm and a two-year investigation, the OISC challenged DDR’s claim to being qualified to provide supervision, meaning any immigration advice given was unregulated and therefore illegal.

The court was told that Burlow & Spencer staff encouraged clients to lie to the Home Office to secure their visa applications.

Burlow & Spencer has now ceased trading, with former clients being advised to contact Fortis Insolvency in respect of fees paid or the return of documents.

Judge Sarah Munro QC said the case would “inevitably result in financial penalties”, and adjourned sentencing until September, after consideration of a financial investigation and possible confiscation orders.

OISC deputy commissioner Dr Ian Leigh said: “In a devious and calculating way over a considerable period of time the scheme put in place by DDR Legal Service LLP, was successful in dishonestly taking a significant amount of money from vulnerable people.

“There was a total disregard for statutory requirements, and they acted in deliberate defiance of the law. The degree of culpability is high, as is the harm they have caused.

“They owe a considerable amount of money to individuals and by the high number of complaints against Burlow & Spencer alone, they have clearly undermined the immigration system.

“These are serious offences that are aggravated by a knowing and calculating disregard of the statutory regime; the sophistication of the offences is reflected by the time and effort put in by officers of the OISC to investigate and prosecute.”