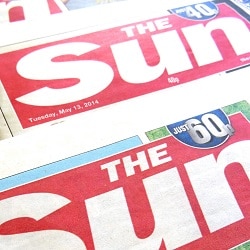 The Sun: Article taken down

The Sun has settled a defamation claim brought by an immigration solicitor it accused of “shamelessly touting” a price list of legal aid fees for migrants arriving in small boats.

Actually, the price list published by Uma Rajasundram and her central London firm Milestone Solicitors, was of the private immigration fees that Milestone had on its website because of the transparency rules imposed by the Solicitors Regulation Authority.

Billed as an exclusive, the article on 30 August 2020 began: “A law firm is accused of shamelessly touting a price list to help migrants stay in the UK. Officials blasted ‘activist lawyers’ for listing charges that will cost taxpayers thousands in legal aid.”

It listed some of the alleged fees, such as £1,500 for deportation cases, before quoting a “Whitehall source” who “slammed “activist lawyers chasing dinghies to get taxpayers’ cash for keeping illegal immigrants in our country”.

Tory MP Peter Bone was quoted as calling the actions of some firms “despicable”, as they claimed taxpayers’ cash after “touting for business”.

The article said Milestone and two other firms had stopped 23 migrants being sent back to Spain earlier that week, leaving Home Secretary Priti Patel “furious”.

On the website version, The Sun illustrated the article with a full-length photograph of Ms Rajasundram wearing a sari and a video captioned “Angry Greek islanders intercept and turn away dinghy filled with migrants from Turkey”.

The Sun subsequently published almost 150 reader comments underneath the article, many of which were described by her lawyers – Paul Turner of Barnes Harrild & Dyer and Mark Henderson of Doughty Street Chambers – as racist and threatening against Ms Rajasundram and her staff.

One comment expressed “hope something really nasty happens to these lawyers”. Others used her photograph and name to allege that she and her staff were foreign and therefore suspect.

After receiving her claim for defamation and data protection breaches, The Sun first removed all the reader comments as well as those under the earlier article about Milestone and two other firms. It next agreed to take down the article altogether and not to republish it.

The claim has now finally settled with The Sun publishing a statement in the newspaper and on the website that said: “On 30 August 2020 we reported on last minute successful legal challenges to certain Home Office deportations. We have been asked to make clear that charging rates which solicitor Ms Rajasundram and her firm advertise on their website for immigration work are for private clients only, not for legal aid.

“We did not and do not suggest that Ms Rajasundram and colleagues act in any way outside the law or professional conduct and we are happy again to make this clear to readers.”

The Sun is also paying the solicitor “a very substantial five-figure sum” to cover her costs.

Ms Rajasundram said: “What The Sun falsely claimed about my firm and I would have involved a serious breach of our professional ethics. Instead, this was unprofessional reporting.

The gratuitous way that it chose to illustrate the article with a photo of me in a sari made the threatening and racist comments that it published underneath the article only too predictable, and left my team fearing for their safety.

“This article was an example of unjustified newspaper attacks on legal aid lawyers working hard to secure access to justice for the most vulnerable in society.

“Legal aid solicitors should not have to face such vitriol just for doing their job. I hope this claim, and what it has cost The Sun to settle it, will help discourage irresponsible journalism that misrepresents our work.”