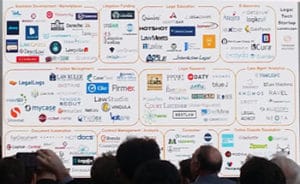 The global legal market is small by comparison with other markets and this is deterring some tech companies from investing, but only technology can service the “vast unmet legal need”, according to a leading lawtech commentator.

He pointed out that just one US retailer, Walmart, with annual revenues of $482bn (£392bn), was worth over half of the global legal market’s estimated $700bn value – arrived at by adding law firm income, corporate spend on in-house legal departments, and consumer spending on legal services.

This was less than half the total value of the US construction market and only half that of the global pharmaceuticals market. He said: “We think of the legal industry as being a large industry but it’s really not that big. A lot of technology companies in this space pass it over because they think it’s not big enough.

“If you are an entrepreneur considering whether to go into legal or… some other consumer field that’s more popular… the market seems a lot bigger in some of those other fields.”

He said that although there was “vast unmet need for legal services out there”, the reason it was not met was simply because “people have no money”. He continued: “You cannot lower the price of an individual lawyer delivering legal services in the traditional way through bespoke custom consultations and advice. The price will never be cheap enough for most consumers…

“So we as an industry have a challenge of coming up with a new business model that makes services available but either somebody else pays or the price gets knocked down to a very low level with the help of technology.”

He said a vibrant global legal tech start-up community was developing, notably in locations such as Stanford University in California, London, and Toronto, Canada. Centres of activity were law schools and universities, start-up and innovation hubs – such as Legal Geek in London – and professional associations, such as the new European Legal Technology Association.

Behind the growth was a recognition that “technology is fun”, he said. “Technology can make the practice of law more exciting, easier, smoother, more friction free.”

But the “bad news” was that a lot of legal tech activity was “very fragmented”, said Mr Curle. Part of this was because the technology itself was diverse – covering such areas as legal research, analytics, document automation, and online dispute resolution.

Also, part of the problem was the challenge of devising applications that could be used in multiple jurisdictions: “It’s very hard to scale legal tech offerings if what you are designing is jurisdiction specific.” However, some applications were cross-jurisdictional, including practice management software.