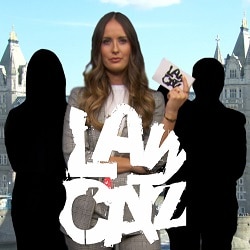 A new TV chat show that aims to “lift the veil on the law” for the general public will be broadcast today for the first time, with a leading QC acting as its resident expert.

LAWcatz will be shown today at 4pm on Sky’s Showcase channel (digital channel 455) and again on Friday, and if it is successful there will be a series of 12 episodes broadcast from January 2019.

It will also be available on social media and on the LAWcatz website.

It is hosted by Rachel Hatton, who is currently a presenter on The Jewellery Channel, and she will be joined each week by PJ Kirby QC, joint head of Hardwicke Chambers in London.

The show is the brainchild of Michael Kain, chairman of well-known costs firm Kain Knight. He said: “We will be providing generic expert legal and good business advice, along with helpful hints and guidance that will help the viewer understand the law, legal terms and how the law affects all of our daily lives.”

Mr Kain, who said the name was inspired by The Squeeze song Cool for cats, added: “Each week the show will feature various aspects of the law and at the same time will look into the strange and often bizarre world of the legal industry.

“In addition, Rachel will explain in simple terms the circumstances of some interesting and in some cases weird and wonderful decisions that have been made by our courts over the years and will looking at the unusual laws and decisions that are being made by our lawmakers today.”

On today’s show, Mr Kirby will explain the process by which laws are made and how the profession is organised, while Katie Khakpour-Smith, a solicitor who runs a will-writing business in Hertfordshire, will talk about wills and probate.

Barrister Tina Morgan will discuss “suing and being sued”, and customer experience consultant Ian Golding will look at choosing the right legal adviser. The historic case highlighted will be Donoghue v Stevenson.

Mr Kain said he had long had an idea of a show explaining law in simple way – akin to Martin Lewis’s Money Show – and the opportunity arose when discussing with a producer after appearing on another Sky channel with his band, The Beaucrees.

As well as viewers, Mr Kain said he needed sponsorship to make the show work – he stressed that this would just be to cover the costs and not make a profit. “Every penny goes back into show,” he said.

Firms can sponsor specific practice areas and discuss them on the show. Viewers who need legal advice in that area will be pointed towards the sponsor.