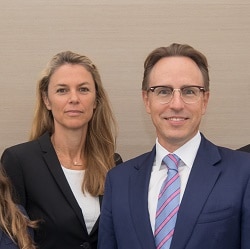 A Swiss law firm that specialises in arbitration work has received an alternative business structure (ABS) licence to open up in London.

LALIVE, a 20-partner firm with offices in Geneva and Zurich, is expecting Brexit to lead to an increase in international arbitrations in the UK.

Some 45 of its 70 lawyers handle arbitration work, and the City office will be led by partners Marc Veit, a Swiss lawyer, and Timothy Foden, an American lawyer who has also qualified as a solicitor. The firm has eight other solicitors in its ranks.

The focus of the London office will be international commercial arbitration, investment treaty arbitration and public international law; LALIVE does not intend to practise English litigation.

Mr Veit told Legal Futures that the firm had set up as an ABS so that it could “incorporate academics, particularly in field of public international law, into the firm”.

There are no plans for any other non-lawyer owners or investors.

Domitille Baizeau, LALIVE’s co-managing partner, who will spend “considerable” time in London, said that, though it already handled common law cases, it was time for the firm to have a physical foothold in the common law world.

The hope is that the new office will enable LALIVE to generate more inbound litigation and white-collar crime instructions, including investigations, asset tracing and private wealth, for its team based in Switzerland by strengthening relationships with English and US law firms based in the City.

Then there was the attraction of Brexit. Mr Veit predicted that, by being outside of the EU, London may become more attractive as a venue for international arbitration “because it may be seen as being more neutral” and not bound by EU law.

“That is the case already for Switzerland. In any event, Brexit will increase volatility in the market, which in turn tends to bring more disputes.”

He added that being in London also provided greater access to third-party funders, whose offering was “really gaining traction in investment treaty arbitrations and commercial arbitrations”.

“We obviously have quite good relationships with third-party funders but it is much easier to be able to meet them face-to-face – it can make a difference, particularly at the beginning of a case.”