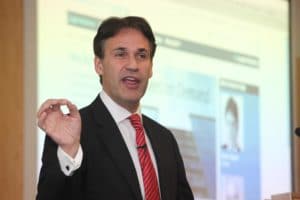 An online court (OC) should be introduced slowly and modestly rather than as a ‘big bang’, according to one of the original architects of the dispute resolution model on which Lord Justice Briggs drew when devising his Civil Court Structure Review.

Giving the Society for Computers and Law (SCL) 25th anniversary annual lecture, Professor Richard Susskind, who headed a Civil Justice Council advisory group which in February 2015 produced a report calling for state-backed online dispute resolution, called for the OC to be “piloted and researched” and for its backers to “show restraint”.

Prof Susskind, IT adviser to the Lord Chief Justice since 1998 – he was introduced at the SCL lecture by the current incumbent, Lord Thomas of Cwmgiedd – and SCL president since 2011, said objections to the OC from practising lawyers had to be “taken seriously”.

He said: “Fundamentally we’re suggesting as basic a change to the justice system as we’ve had for many hundreds of years… [and I am concerned] that we may be going too quickly and too ambitiously.”

The OC should start with a small claims pilot: “Pilots are always sensible and then we’ve got to study the results, we’ve got to understand what the impact was, the cost, and so forth. We’ve got to pilot and then research, and after that we refine, we build incrementally.

“I fear… that in the end we’ll go for one big bang. We need to show restraint. I really feel we need to go at a more measured, modest pace and this will allow us to have coherent and important public debate about the long-term impact of this technology.”

However, 20 years after his seminal book The Future of Law was published, Prof Susskind said that while all lawyers needed to “be on the same page and move together”, he believed that among those who objected to the OC, “no one seems to be offering a credible alternative narrative”.

He added: “None of us can be confident online courts will be the panacea some people predict, but it does seem in light of the evidence we’ve seen so far that this is tremendously promising.

“The alternative… that most legal work needs to be done by lawyers, it seems to me, is going to leave most people bereft because the system is unaffordable, unintelligible, and is far too slow.”

He believed pressures on funding law for individuals were more likely to be experienced too by large international law firms. Many firms still believed they were “exceptional” and that “bet-the-ranch deals or disputes” were essentially “price insensitive”, but this was increasingly less often the case.

The ‘big four’ accountancy firms were “formidable organisations” and were poised to take work traditionally the preserve of law firms, he said: “Strong though the top-100 legal brands may be, they’re not as strong as the big four. Most boards are populated by people of an accounting and finance background who recognise these brands as unimpeachable.”

He said the link-up this summer between Allen & Overy and Deloitte to launch the MarginMatrix digital derivatives compliance system was until recently unthinkable. “Here is a fundamentally disruptive innovation in law by one of the world’s leading law firms with the support of one of the big accounting firms…

“Many law firms around the world… assumed that these new regulations would be a feeding frenzy for years… [but the MarginMatrix] system is replacing the work that lawyers might reasonably have thought they’d be undertaking in bringing these [new derivative] regulations into force.”

Prof Susskind predicted that in future rules would increasingly be embedded within systems, so that compliance would be automatic.

He also said that a common mistake made with artificial intelligence was that people set the benchmark at computers thinking like humans, whereas processing power and big data-based analysis would achieve outcomes differently.