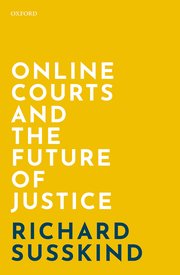 Professor Richard Susskind has called for the development of a “standard, adaptable, global platform for online courts” that can be rolled out to fortify access to justice around the world.

The renowned academic said he was “confident that online courts offer the most promising way of radically increasing access to justice”, initially for low-value civil disputes, but in time for a much wider range of claims.

The rallying call came in his new book, Online Courts and The Future of Justice, published today, which expands on Professor Susskind’s work in recent years to promote and design an online court for England and Wales, which was taken up by Lord Briggs and is now a core part of HM Courts and Tribunals Service’s £1bn court modernisation programme.

“My main motivation in calling loudly for online courts is to improve access to courts and legal services,” he wrote.

“I want it to be easier for everyone to understand and enforce their legal entitlements. It worries me deeply that, for most people, even in avowedly advanced legal systems, our courts are too costly, too slow, and largely unintelligible.”

The book concludes with Professor Susskind’s vision for a global platform, supporting both online judging and extended court functions aimed at resolving disputes without the need for a formal adjudication.

“The platform, made available in open-source spirit, could come pre-populated with a set of embedded procedures that could be tailored to suit individual jurisdictions.”

He accepted that this was a “highly ambitious agenda” with multiple obstacles in its way.

“But we should surely be able to find the resolve and funds to design and build a standard global platform for the resolution of low-value civil claims in online courts,” he said.

“If the platform came to be used even in a small number of countries, it might change the lives of many.” In the book, he refers several times to the reported backlog of 100m cases in Brazil.

“My early investigations in this direction, in a dozen or so jurisdictions, have been received positively. It is certainly worth a try.”

The book outlines Professor Susskind’s view that it is unlikely that the current court systems, legal institutions and legal professions will remain substantially unaltered over the next couple of decades.

“On the contrary, it seems to me that the least likely future is that nothing or little will change. And yet, the long-term strategies (if they have strategies) of most judiciaries and governments make precisely this assumption of modest adjustment.”

But he argued that the prevailing model of court service was not sustainable. “It is already broken and in any event unaffordable, and so we should be thinking deeply about what might lie beyond.”

In the longer-term future, as technology developed, this could include a court appearance by “holographic telepresence”, the use of augmented reality to help people understand what is going on in court, and even public hearings taking place in a virtual reality environment.

Online dispute resolution could look beyond the automation of ADR and use the reach and versatility of the internet to provide new ways of settling disagreements, such as enabling community voting on the outcomes of cases, Professor Susskind added.

In the nearer term, the IT adviser to the Lord Chief Justice envisaged ‘assisted argument’, helping litigants in person with ‘argument-flows’ and templates to capture the structure and content of the standard arguments in the most common types of low-value cases before the courts.

The book addresses the objections to online courts, including those of lawyers worried about their futures.

“Looking ahead, when there are systems that can advise on the law, if the procedure is simplified, there are no physical hearings, and there are case officers and judges to help court users along, there will be fewer opportunities for lawyers to add value, certainly in lower-value cases.

“However, there is an issue of sustainable justice here. If indeed the introduction of online courts diminishes the number of practising lawyers, we must be cautious that we leave ourselves with a sufficiency of lawyers to conduct the many and various tasks which for many years will not be replaced by new processes or taken on by machines.”

Professor Susskind also considered the moral acceptability of computer judges, saying his personal view has changed over the years from horror at the idea in the 1980s to a more nuanced view that recognised how difficult moral issues invariably required a choice between two or more undesirable states of affairs.

“I can see the moral objections to the computer judges, but they can, in principle, be outweighed on my moral calculus by the manifest injustice of having no recourse whatsoever to the state for the resolution of legal problems.”