Susskind: ABSs will have international ripple effect and break down protectionism 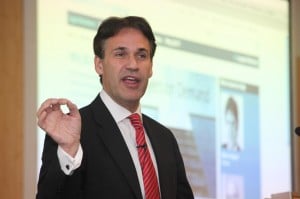 And he predicted that within a decade or so, “most advanced jurisdictions, and many emerging jurisdictions as well, will have liberalised in the manner of England. And even if this does not come about, liberalisation in some countries will give rise to liberation in most others”.

Opposition to non-traditional practice is strong among some US lawyers, with the American Bar Association (ABA) last year ditching plans to explore non-lawyer ownership. Further, online legal services providers face court action from local bar associations over the unauthorised practice of law, and last year senior US general counsel argued that any form of non-lawyer ownership of law firms is bad for clients.

Writing for the ABA’s Law Practice magazine, Professor Susskind said: “I want to challenge whether this is about protecting clients or protecting lawyers. I distinguish between professions that behave as jealous guards and those that act like benevolent custodians.

“From this side of the Atlantic, I fear that many professional legal bodies and some lawyers in the U.S. are veering worryingly toward the first category. We should survive as lawyers because we have the knowledge and experience to bring value in legal affairs that others cannot, and not because we regulate so that competitors are not allowed in the arena.”

He urged US lawyers to recognise that not all the changes in the market in England and Wales have resulted directly from the Legal Services Act, “but this legislation – and here is the central point rather than the particulars of each initiative – is giving rise to a remarkable, entrepreneurial and exciting spirit…

“Crucially, even where there is not liberalization, we are witnessing what I regard as a liberation from the limitations of narrow thinking about the way in which legal services can and should be delivered. No one can know where this might lead. But we can be sure that major change is upon us.”

Professor Susskind said that while many US lawyers dismiss liberalisation as the idiosyncrasy of a small number of misguided jurisdictions, “I predict that when liberalisation leads directly to the development of new legal services that more fully meet the growing ‘more for less’ challenge of clients, this will have an international ripple effect.

“I think it inevitable that when general counsel of major global businesses benefit from or even hear about new forms of far less costly service in liberalised regimes, they will surely demand similar service in their own countries. Law firms in traditional markets, such as the US, may find themselves at a competitive disadvantage.”